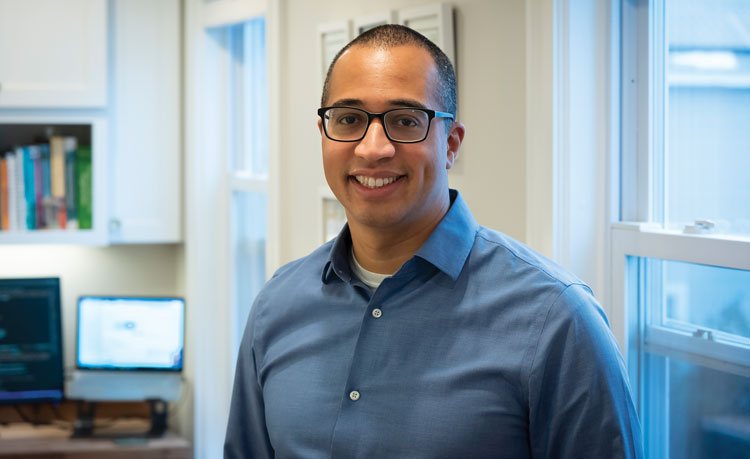 Quinten Steenhuis made his first foray into programming on an Apple II as a kid in Ithaca, New York.

He carried that childhood interest in computers to Carnegie Mellon University, where he studied logic and computation and used his technical skills to advocate for social justice before the start of the Iraq War in 2003. “We were pioneering this use of a concept we called ‘open publishing.’ At that point, social media didn’t really exist, but we let people who were attending anti-Iraq War protests or globalization movements upload photos and videos and stories,” says Steenhuis, 38, who later attended and graduated from Cornell Law School in 2008.

Steenhuis has pursued his dual passions for programming and access to justice throughout his entire career. For nearly 12 years, he worked as a senior housing attorney, systems administrator and developer at Greater Boston Legal Services, where he also built Massachusetts Defense for Eviction, which helps pro se tenants defend themselves in eviction cases. Since Steenhuis launched the free online tool in 2018, it has assisted tenants across Massachusetts in preparing the seven forms they need for their hearings.

MADE was created using Docassemble, task automation software designed by 2019 Legal Rebel Jonathan Pyle, and it can be accessed on a computer or smartphone. It is available in English and five other languages and includes videos and educational materials. “It’s a multiplier for people in legal aid,” Steenhuis says, pointing out that MADE allows lawyers to help many more people than they could have before—without having to be there in person. “People can use it completely on their own, or they can use it with the help of someone on the phone or over Zoom. If an attorney fills out most of the paperwork, they can send it electronically to a tenant to add their signature and review it before it gets filed to court.”

Steenhuis quickly expanded this work after he became a clinical fellow in Suffolk University Law School’s Legal Innovation and Technology Lab in March 2020. He started the same day campus shut down because of COVID-19 and was inspired by a letter from Massachusetts Supreme Judicial Court Chief Justice Ralph Gants, who died in September 2020, asking the bar to “figure out how we can find new ways to protect the most vulnerable, preserve individual rights, resolve disputes and somehow keep the wheels of justice turning in the midst of this frightening pandemic.”

In cooperation with the Massachusetts Access to Justice Commission’s COVID-19 Task Force and several other partners, Steenhuis helped develop MassAccess, an emergency response project that has engaged more than 100 volunteers from five continents to create smartphone-friendly versions of online court forms and self-help materials in several languages. They started in April 2020 with a form that helps tenants address emergency housing conditions with their landlords and have since automated forms in additional areas of urgent legal need, including the petition for a restraining order in domestic violence cases. These forms are filed electronically with the trial court once completed.

“I am really hopeful that courts will keep moving in this direction, allowing remote access, not making people come in for a 5-minute hearing and spend three hours in court,” Steenhuis says. “I see it as a universal accessibility issue, and people having this access through their phones is really critical.”

Steenhuis also has assisted with related projects outside of Massachusetts. He is a consultant and mentor to the New Hampshire Legal Advice & Referral Center and Illinois Legal Aid Online, which received a Legal Services Corp. grant in 2019 to develop standards for automating documents using Docassemble. In addition, he helped the Northwest Justice Project and Capstone Practice Systems automate a parenting plan and a domestic violence protective order using HotDocs for Washington Forms Online.

“Unlike many of us, he had a career in programming before he became a lawyer,” Capstone founder and president Marc Lauritsen says. “We are lawyers who have picked up aspects of technology later in life. But Quinten combines the expertise of a coder with the passion of a social justice warrior.”

In his free time, Steenhuis enjoys biking, advocating for recycling and serving his local community in other ways. “I try to stay involved in committees that touch on the work I’m doing,” he says.