Ernie Svenson, aka the well-known blogger Ernie the Attorney, loves New Orleans and wouldn’t think of leaving. But when Hurricane Katrina blew through, it changed his life and, in turn, his approach to practicing law there.

“I didn’t know why exactly, but I knew I wasn’t happy,” says Svenson, who had been practicing for 15 years and was with one of New Orleans’ bigger firms when the storm hit. He liked the firm but didn’t care for the highly structured environment. Post-Katrina soul-searching took him out on his own.

The timing was right. Technology, especially software, was fast making it easier for a David to compete on the playing field with Goliaths. Svenson, who has been selected as a Legal Rebels Trailblazer by the ABA Journal, went out on his own in 2006, quickly learning that with the right tools he could continue his commercial litigation practice, particularly franchise work, without the big-firm staffing and equipment.

“Once you’re on your own and comfortable with useful technology, law practice can become easier, not harder,” Svenson says, noting that rather than limiting what can be done, going solo offers opportunities for venturing out into other kinds of legal work—without dealing with committees.

Svenson was an early evangelist for what he calls “the paperless chase” (he has a website for it: PaperlessChase.com). The basic premise: “Anything you can do with paper, you can do more with PDF. Way more.” And now he spends a lot of time teaching, training and speaking, all aimed at enabling small-firm and solo lawyers “to save money, make money and outmatch bigger-firm adversaries,” he says.

Calling Svenson an evangelist is an understatement. He is in some ways his own disruptive technology—not only in how he regularly changes and refines his use of technology but also in how his approach to life affects his work. For example, in early 2014, Svenson began a regular practice of meditation, which he believes has made him more self-aware and balanced.

“It also has helped me to think more clearly, and ideas for better ways to do my work come more naturally,” he says.

That calmer, more supple mindset could help sooner rather than later in the paperless chase, he says: “The walls are closing in on lawyers who haven’t adapted, with e-filing in the courts and the increased use of the PDF format by others. It’s here. It’s good. Do it.” 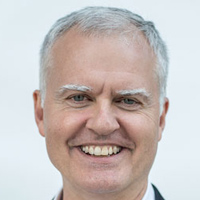 Ernie Svenson is a New Orleans commercial litigator who spent 20 years practicing law in a big firm. Then he learned the secret of paperless lawyering, which led him to create a streamlined solo law practice. He is the founder of SmallFirmBootcamp.com and a nationally recognized speaker and author. His main business website is PaperlessChase.com, and his personal site is ErnieTheAttorney.net.