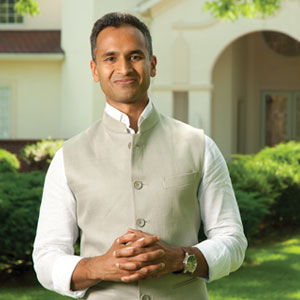 After finishing at Harvard College and before entering Yale Law School, Vivek Maru, born and reared in the U.S., took off more than a year to live in a hut made of sticks and dung amid the poverty and pollution of India’s Kutch region, from which his grandfather came. Maru worked with grassroots organizations on watershed management and education for girls.

Daily he saw village women walk a mile and a half to fetch drinking water with clay pots balanced on their heads. His return to the U.S. was jolting: “In the law school cafeteria, I would press a little button to get juice and pink stuff flowed out. I felt vertigo in the transition coming back.”

Maru, 40, has made a career dealing with transition, helping locals in Africa and Asia as developed nations compete in a global land rush to gain use of natural resources in less-developed areas. In 2011 he founded an organization called Namati, which now works in eight countries, primarily developing cadres of paralegals to bring legal empowerment at the community level.

The issues are wide-ranging: seeking proof of citizenship or deeds of title for family property, gaining legal rights for women while navigating gaps in plural legal systems that can include statutory, customary and religious law, being thrust suddenly into lopsided negotiations with megacorporations wanting their way with the land.

Namati is a Sanskrit word meaning to shape something into a curve, and its choice was based on Martin Luther King Jr.’s remark that the “arc of the moral universe is long, but it bends toward justice.”

Maru’s senior paper at Harvard was about social action by King, Gandhi and Malcolm X. He almost dropped out of law school immediately in 1998 because it wasn’t presenting him with a Gandhian approach for such work.

“The law seemed reactive rather than constructive, with adversarial traditions and zero-sum outcomes,” says Maru, who soon would be steeped in the ways of that system as a judicial clerk for the 9th U.S. Circuit Court of Appeals at San Francisco. “I may be naive, but it didn’t feel right. I’m glad I hung in there.”

After the clerkship, a friend invited Maru in 2003 to help Sierra Leone recover from its 11-year civil war. They co-founded Timap for Justice, which became a template for Namati. Timap developed a network of paralegals around the country, which had a plural legal system, to address two of the biggest causes of the upheaval: arbitrary governance and maladministration of justice.

There were about 100 lawyers in Sierra Leone at the time, Maru says, and nearly all were in Freetown, the capital. In the communities around the country, Timap placed paralegals who could own the problems and solutions. Besides advocacy and mediation, they educate and organize to increase empowerment through laws and regulations that often are already in place. They teach communities how to solve problems themselves.

“Paralegals working and living in the community can squeeze a lot of justice out of the system,” says Maru, who committed to one year in Sierra Leone but stayed four. He spent the next four as senior counsel in the World Bank’s Justice Reform Group.

In 2009 the Open Society Justice Initiative helped create the Global Legal Empowerment Initiative, and Maru saw a way to get back to grassroots work. With help from that organization and others, he launched Namati.

Operating in communities in Kenya, Liberia, Mozambique, Sierra Leone and Uganda in Africa and in Bangladesh, India and Myanmar in Asia, Namati has 88 paralegals at work, with some lawyers they can turn to when needed. They are part of a growing global network for legal empowerment that now includes 450 organizations.

Through the sharing of ideas and methods, the collaborative network prevents the isolation of efforts in various countries.

Says Matt Brown, Maru’s Yale Law School classmate and a member of Namati’s board: “What makes it hard, interesting and ultimately important is Vivek and Namati are creating a new field of legal empowerment, partly by running programs that are models, and partly by strategically stitching together many organizations and activists around the world into a global force for solving some of the big problems.”