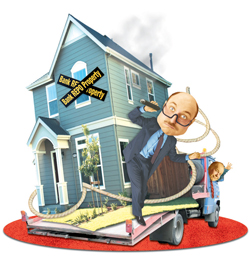 Imagine, if you will, coming home from work one day and your keys no longer fitting the locks on your doors (cue the music from Scream 2). But you manage to get in somehow and find the place a mess, the furniture and carpets damaged and the utilities turned off.

Looks like a home invasion, but new locks? And where’s the parrot? While your head is swimming in confusion—and you’re wondering why you’ve remained in the house despite the obvious parallels to every horror movie you’ve ever seen—it suddenly hits you (clarity, that is, not an ax): You’ve been repo’d.

Being just one payment in arrears, Angela Iannelli of Hampton, Pa., was undoubtedly not expecting such a scenario to unfold. After all, she claimed in a lawsuit filed in March in Allegheny County Common Pleas Court, her bank had neither served notice of a 60-day deficiency nor given her 30 days to rectify it, both of which are legally required in the state.

The bank reportedly declined to offer Iannelli any compensation for the error until she retained an attorney; and even then she was offered what Iannelli considered an insufficient amount.

(A happy sidenote: Iannelli was eventually reunited with her beloved parrot, Luke.)

An unfortunate byproduct of economic malaise is an upswing in foreclosures and repossessions. That brings increased opportunities for mistakes to be made, such as what happened with Iannelli.

Or with Christopher Hamby of Wheelwright, Ky.

Last October, Hamby had much the same experience—locks changed, utility lines cut, winterizing chemicals in the plumbing—but here’s the kicker: Hamby had no business relationship of any type with the bank that ordered the repo.

Hamby—unable to rent or sell the damaged property—is suing the bank and its agents, citing “reckless disregard.”

But this just keeps getting better (worse?). A Hous-ton man, Alan Schroit, filed a lawsuit in January in the 122nd Judicial District Court in Galveston after he and his wife were locked out of their vacation home there. The Schroits reportedly had about 75 pounds of Alaskan salmon and halibut in a freezer, to be served at a large party they were planning, and the power was turned off.

As stated in the lawsuit, when they managed—with police assistance—to enter the home, the Schroits were hit with an “overpowering putrid smell of rotten fish.”

This was a case, yet again, of the wrong house being seized. However, it was even more inexplicable, since the Schroits own the home free and clear.

What does it all mean? For one thing, it means that Bank of America, the bank involved in all three cases, has got a lot of ‘splainin’ to do. And hey, we might have a new reality show taking shape before our eyes—Extreme Makeover: Botched Home Repo Edition.

But what it really means is that, despite your best efforts to the contrary, someday you may well end up having to sue somebody.