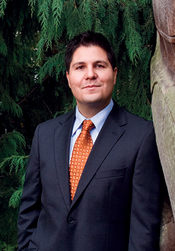 Litigator Gabriel S. Galanda always wanted to represent tribal governments. A descendant of the Nomlaki and Concow tribes, he was prepared to do just that after graduating from law school in 2000. That is, until he got an offer he couldn’t pass up.

Williams, Kastner & Gibbs, a 90-lawyer firm with offices in Washington and Oregon, offered him an associate position in its Seattle office. Al­though the firm had nothing to do with representing tribes or tribal governments, Galanda felt the position afforded him the opportunity to reverse the trend of poverty in his family. He accepted.

For three years, Galanda defended asbestos claims. But that didn’t mean he abandoned his dream. “I was anxious to represent tribes as fast as I could, but I knew my target market would need the same skills corporate America needs,” he says. His solution? Work double time. “My 7 a.m. to 6 p.m. job was product liability defense, and I found another 500 hours a year to delve into the tribal legal community,” he recalls.

Galanda’s strategy paid off. He taught himself tribal law, then researched and wrote articles. Even­tu­ally, he became a leader in his regional tribal bar association. By 2005, Galanda was able to make a full transition into tribal law. Now he specializes in Indian law and gaming, and he recently became the young­est partner in his firm’s history.

Plenty of new lawyers start off wanting to work in a niche practice area. After a few years, however, it’s not uncommon to end up in a rut. But lawyers who have made their mark in a specialty say it’s never too late to refocus once you’ve learned to be a good lawyer; you just burrow in and concentrate on becoming an expert in whatever field you had intended to enter.

Galanda advises patience. “Young lawyers need to see beyond their own emotions and be very patient with their career,” he says. “Listen to the people who tell you to learn how to lawyer first. It wasn’t without heartache, but I’m very thankful to people who gave me that advice.”

Sports lawyer Howard L. Jacobs agrees. “The work I do is all litigation, whether it’s arbitration or trial work,” says the Westlake Village, Calif., solo practitioner. “So I tell lawyers to work for the best law firm and become the best lawyer they can first.”

DEVELOP YOUR OWN EDGE

In college, Jacobs competed in track and field, and during law school he was a pro­fessional triathlete. By staying active in the tri­ath­lon world while he practiced admiralty, transportation, and labor and employ­ment law, Jacobs began to get sports referrals.

Now he’s nationally known for representing athletes accused of doping. His edge, he says, is his self-taught expertise in the science of doping claims.

“You have to be willing to spend time on your own to learn the area,” says Jacobs, whose only science education was a meteorology class in college. “I spent a lot of time reading articles on the testing and science. Within a year or two, I’d developed a reputation with­in the Olympic movement as being well-versed in the science side of doping cases.”

Megan Gray, of counsel at Roy­lance, Abrams, Berdo & Goodman in Washington, D.C., also spent her free time developing her expertise. “Get experience at any cost,” advises the trademark and copyright attorney. “When I started practicing, I spent my two-week vacation working at the Olympic Games in Atlanta as a volunteer trademark enforcer. That gave me experience, was something to put on my resumé, and was incontrovertible evidence that I was dedicated and a hard worker.”