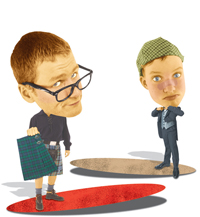 Somewhere between Milton Berle yukking it up in a dress in the early days of television and 1999’s gender drama Boys Don’t Cry, the appropriate reaction to seeing someone in the duds of the other gender got a whole lot more complicated.

Is wearing the costume of the opposite sex meant to be a joke, or a very serious statement about gender identity? For some, this is an authentic way of being who they really are—sometimes at the risk of injury or death caused by those who are threatened by it. For others, it’s the source of a cheap laugh. And then there are just some dudes who dig skirts.

Authority figures like judges and school principals—who operate within a framework of established laws and policies—are often left struggling with what reaction is most appropriate when it comes to addressing gender issues.

Take the case of Jeremy Kerr, 37, of New Orleans. He happens to find skirts more comfortable than pants, so he wore one to municipal court in May 2008. He claims a uniformed officer grabbed him by the shoulder and threatened to arrest him.

Kerr—describing himself as “a heterosexual male of Scottish ancestry”—filed a lawsuit in April in the U.S. District Court for the Eastern District of Louisiana seeking a declaratory judgment that his rights were violated. He’s seeking damages of a mere $1, along with court costs. (And no, it was not a kilt he was wearing.)

School principals have had to walk a rather fine line lately. O’Rhonde Chapman, a senior at Nimitz High School in Houston, regularly attended classes in a blouse, skirt and makeup. But when he added a wig and stiletto heels in November, he was sent home. The wig was a bit of a gray area in the dress code, but the heels were expressly forbidden.

Then there is the Mississippi high school that has male students wear tuxedos in their senior portraits and females wear a black shoulder drape as a kind of uniform. Wesson Attendance Center officials refused to let Ceara Sturgis, a lesbian student, be pictured in the yearbook wearing a tuxedo, so in October her mother took out a full-page yearbook ad with Sturgis looking sharp in the penguin suit.

But there are times when schools’ decisions can be as disorienting as plaid with paisley.

Plaid, in fact, figured prominently in a duds-related dustup in a West Haven, Utah, junior high school in May. Gavin McFarland, a 14-year-old student of Scottish heritage (why are those Scots so misunderstood?), wore a kilt to school as a prop for an art project. The principal deemed it cross-dressing and demanded that he remove the garment. (In a sensible sacrifice to authenticity, the laddie had worn shorts underneath.)

A school district spokesman issued a statement a few days later saying that the wearing of the kilt—which, according to press reports, had been lovingly hand-sewn by McFarland’s mother—was not to be considered cross-dressing.

While the schools and courts wrestle with these issues, let’s ask ourselves: Who among us hasn’t had our apparel decisions questioned for one reason or another? So maybe it’s time to stop getting our undies in knots over who wears what and pay more attention to the fabric of a person’s soul.