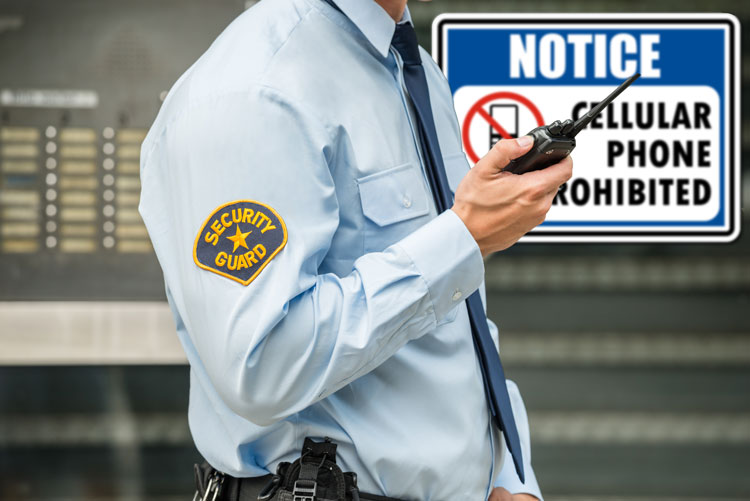 She hears from many that they can’t come to court without them because they need to be available to their children or elderly parents, arrange for transportation or go to work afterward.

She also hears that some of these clients stash their phones in planters outside of courthouses or pay local vendors to hold them until they finish their business inside. The Bernalillo County Metropolitan Court in Albuquerque, used to offer free storage lockers, but those closed in July.

“As attorneys, we can bring in phones, so it’s creating a weird class issue,” says Afek, the volunteer attorney program director for New Mexico Legal Aid. “It is disproportionately affecting poor people and self-represented litigants.”

It’s an issue the ABA House of Delegates addressed in August by approving a resolution that encourages courts and bar associations to review their policies on the use and admittance of cellphones in courthouses.

Resolution 116, which passed overwhelmingly at the ABA Annual Meeting in San Francisco, asks that these policies balance the security risks posed by cellphones with the needs of litigants, particularly those who represent themselves.

It also opposes policies that burden litigants or force them to leave their cellphones in locations that are unsecure or charge a fee.

Eileen Letts, a partner at Zuber Lawler & Del Duca in Chicago and a Litigation Section delegate to the House of Delegates, introduced the resolution and said it addressed an “access-to-justice issue.”

Self-represented litigants often have emails, photographs or other evidence for their cases on their cellphones or use them to search online for legal information, Letts said. Many of them are unaware that cellphones are banned until they arrive at the courthouse.

“What if you arrive by public transportation?” she said. “Then what are you supposed to do?”

According to the report that accompanied Resolution 116, there some primary reasons cellphones have been banned from courthouses: They may disrupt legal proceedings; they could contain firearms or trigger explosive devices; and they could be used to threaten witnesses, jurors, prosecutors and other trial participants.

The National Center for State Courts lists 31 states and Washington, D.C., and Guam as having policies governing cellphone and electronic device use.

While there is no uniform policy on cellphones in courts, the U.S. Office of the Courts Committee on Court Administration and Case Management provided federal judicial systems with guidance in 2017 on developing rules related to cellphones.

The Massachusetts Appleseed Center for Law and Justice published a recent study—which was also cited in the report that accompanied Resolution 116—on how cellphone bans affect access to justice. It offered several solutions that could allow litigants to bring their cellphones to courthouses while minimizing any inherent risks.

Potential solutions include requiring cellphones to be turned off or placed in airplane mode and calls to be made only in designated areas.

Deborah Silva, the executive director of the Boston-based organization, says she first heard about the issue from community partners who worked with self-represented litigants and saw that it was a significant barrier to them.

While Massachusetts trial court policy does not prohibit cellphones in courthouses, 56 court facilities in the state banned cellphones at the time of the study. Silva says several now plan to address those bans.

“It’s not an issue that is unique to Massachusetts, so this could go a long way to help self-represented litigants across the country have more access to the resources they need to get fair outcomes in court,” she says.