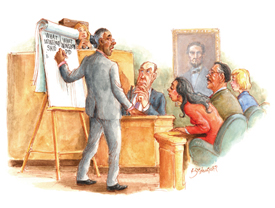 “We have a client who’s seriously concerned about that big insurance fraud case in Judge Randall’s court, so my firm assigned me to watch and report on the trial,” Mary said. “I just spent one of the most boring mornings of my life listening to what are supposed to be two of the brightest lights in the corporate bar give their opening statements.”

“They’re the ones,” Mary said. “Between them they put three different jurors to sleep—and no one noticed.”

“Not this time,” Mary said. “It had nothing to do with style or legalese. This was different. Even though everything was easy to follow, it was completely boring. Nothing was worth listening to. Whatever it is that makes a story interesting wasn’t there. I had to force myself to stay awake and take notes.”

“That’s a $250 million fraud case,” said Ernie Ballentine. “Seems to me it should be inherently interesting. What was missing that made the opening statements so dull?”

“Tension,” said Beth Golden. “I was there, too. There wasn’t enough drama in what either lawyer said to make you care what happened.”

“But facts win lawsuits,” said Dick Mudger. “Basic facts and the jury’s desire to right a wrong—not sparkle and glitz. Why should theatricality make so much difference?”

FOCUS ON THE CRISIS

“It’s not cheap theatricality,” said Angus. “It’s basic human psychology. Tension is the product of conflict. It says something is going to happen, and it makes you worry or wonder what it’s going to be.

“Writing expert Gary Provost said tension ‘makes the reader concerned enough or curious enough to keep reading even when the actual spoken words are mundane. Remember, if the reader doesn’t care what happens next, the dialogue is not working.’

“The problem for the author,” Angus said, “is how to create conflicts that will pull the reader into the story. For lawyers, it’s different. The conflicts are already there—every case is filled with them. Our job is to shape the case. Bring the facts together in ways that make the conflicts come back to life, and orga­nize them so the judge and jury keep wanting to hear more.”

“It sounds good,” Mary said, “but how do you do it in an opening statement?”

“The simplest way,” Angus said, “is to start with a crisis—an emergency, a truly difficult situation that could end in disaster. Virtually every case, no matter how dull or ordinary, has a central crisis. In a contract case, for instance, it could be a broken promise that leaves a toy manufacturer without the electrical connectors it needs to make its new video game in time for the Christmas season.

“You tell the story using the language of visu­alization,” Angus said, “so the judge and jury see for themselves what the crisis was all about. And you or­ganize it so that each fact makes them want to see what happened next.”

“Now that’s got to be magic,” Ernie said. “You’d need a pact with the powers of darkness to make people hang on every word you say.”

“Nope,” Angus said. “No deal with the devil is required. Just a few of the simple literary techniques you learned in 10th-grade English. Like foreshadowing—dropping a hint of what’s to come.

“Here’s my favorite. The first thing you say is, ‘Ladies and gentlemen, this is a case about a young woman’s eyes.’ Then you pause for a few seconds to let that sink in.

“So, Ernie, suppose you’re on the jury. What are you thinking right now?”

“Do you want to know what happened to her eyes?” Angus said.

“And how it happened?”

“You weave the answers to those questions together so that each one naturally introduces the next,” Angus said. “And you can be even more subtle in how you drop the introductory hint.

“Like this: ‘So, Mark Willis agreed to buy all the wood he needed from Tri-City Lumber and Supply Co. They gave him their word. They promised they would deliver all the wood for those houses for $3.5 million.

“ ‘Mark believed them. He trusted them. He count­ed on them. He relied on them. He went out and hired the three extra building crews he needed to do the work. He had 12 basements dug, 12 foundations poured, 12 water mains installed, 12 power lines hooked up.’

“I’ll stop right there,” Angus said. “Without knowing any more, what do you think happened next?”

“Tri-City broke their word,” Mary Archuleta said. “They went back on their deal and wouldn’t deliver the wood.”

“You got it,” Angus said. “And I want you to notice something. That’s your conclusion. No one fed it to you; you figured it out yourself.

“That’s important because people like their own ideas—and when those ideas get confirmed later on, they feel that their thinking has been validated. That’s the kind of feeling that leads to commitment.”

“But however you do the introduction,” Mary said, “it’s a crisis—a conflict—that creates tension, and tension is what makes people pay attention to your opening. Right?”

“Exactly,” Angus said. “But it’s not just for opening statements. Tension is a key part of what creates interest throughout the trial.

“Take cross-examination, for example. Too many lawyers think that it’s superficial emotion—theatricality—that makes cross-examination interesting. It’s an unfortunate idea that comes from television, movies and the desire to convince clients that they’ve hired the meanest dog in town. It leads lots of lawyers to act like nasty little twits who alienate everyone in the courtroom.

“But if you focus on the conflicts that are in the witness’s own testimony, you can be polite even as you demonstrate that the witness keeps getting things wrong.”

“One great way to set the stage for a series of important impeachments is to foreshadow what’s coming by telling the witness—and, incidentally, the jury—some of the topics you’re going to cover in your cross. It’s an introduction that creates its own tension:

“ ‘Mr. Drake, I’m going to ask you some questions about three different events: a meeting you had with Donald Pfister on March 27, a memorandum you received from Andrea Montel on March 28, and 20,000 shares of stock in Montel Communications you sold on March 31. Let’s begin with Donald Pfister. You’ve known him ever since September 2000?’

“Start a cross-examination like that,” Angus said, “and people can’t wait for the rest. But be careful. Throwing down the gauntlet promises a lot more than a series of quibbles. So every point you make had better be clear, simple and powerful.”

“What about direct examination?” Ernie said.

“Each direct should be a story—or part of a story—about the conflicts in the case,” Angus said. “Your job is to make them come alive.

“Say you’ve got a simple fraud case against a man named Winslow. Direct examination of your plaintiff can easily get bogged down in piles of details that lose their meaning in minutes.

“But two simple lists that you write on the board as the witness testifies can bring instant understanding and create an indelible memory. Your headings are ‘What Winslow said’ and ‘What Winslow did.’

“Even after you erase the lists, the conflicts between what he said and what he did will argue your case for the rest of the trial.”

The ABA Journal is occasionally reprinting some of Jim McElhaney’s most popular columns from past years. This article originally appeard in the Journal’s September 2002 issue under the headline “Creative Tension.”

Next:
The EEOC's Brave New World