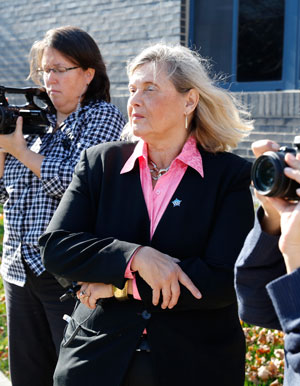 Gera-Lind Kolarik credits her aunt, a lawyer in the 1950s, who told her “how you have to tell the people’s story.” Photographs by Wayne Slezak

During a snowstorm in 2011, an 18-wheel tractor-trailer going 50 miles an hour slammed into Brian Benning's Toyota Sienna near Dakota, Illinois, a few miles from the Wisconsin border. The high school basketball coach suffered 27 broken bones and traumatic brain injuries, nearly losing his life. In the days just after the accident, a steady stream of surgeons, nurses and physical therapists were brought in—as well as former television news producer Gera-Lind Kolarik.

“Gera-Lind even came in at 5:30 in the morning to show how hard it was for me just to take a shower,” Benning says. “It was tasteful and respectful, and it painted an accurate picture of what life is like.”

Kolarik is the executive producer of Evidence Video, a Chicago-based company producing documentary-style videos for plaintiffs in personal injury and wrongful death lawsuits.

The PI video business went viral long before social media. Robert Clifford, founder of Chicago’s Clifford Law Offices, says use of such videos “went in full swing in the early ’90s. People saw what guys like me and others were doing with our substantial verdicts … and did what we did.”

“My work has doubled in the past three years,” Kolarik says, noting that by late November she had done 147 videos in 2015. A good year used to be about 100 videos. 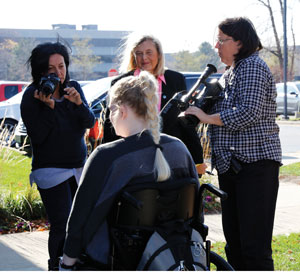 Kolarik (center, facing) documents plaintiffs’ experiences throughout a typical day so that jurors can better understand the hardships they endure.

Kolarik doesn’t lack for competitors, including Colton Creative Media of Boca Raton, Florida, and Geomatrix Productions in Woodbridge, Connecticut. And many share her expertise, honed during years as a TV news reporter. “I was a longtime ABC national correspondent,” says Andrew Colton, whose Colton Creative Media produces Life after Loss videos. “Half of my work is using the interviewing skills of a journalist to get to the emotions of what the family is going through after someone has died or been injured. It’s not just the victim whose life has changed but everyone around them. It’s knowing how to ask a question, how to extract the information without putting yourself in the story.”

Kolarik has 14 years’ experience at ABC’s Chicago affiliate producing investigative reports. At age 61, she is a “woman who has seen a lot, and some of it not pretty,” says Terry Hegarty, founding partner of Terrence K. Hegarty & Associates in Chicago. “She doesn’t charm you to death, but she does talk about what’s real in very short order.”

Kolarik credits her talents in this work to her aunt, who became a lawyer in the 1950s. “She took me to court with her and told me how you have to tell the people’s story.”

Though now commonplace, courtroom videos were a new idea in the mid-’80s, when Hegarty approached Kolarik about producing a video for a client who became a quadriplegic after a fall from a ramp at Soldier Field in Chicago.

She studied videos that were just beginning to be accepted in California courtrooms, teamed up with a former wedding videographer, then produced a video for Boll v. Chicago Park District. The case resulted in a $16.5 million verdict in 1991, later reduced to $6.6 million.

Since then, Kolarik has worked on many high-profile cases. In 2012, she made a video for Gabriela Cedillo, an extra injured on the set of Transformers 3, who received an $18.5 million settlement. Evidence Video has worked on cases resulting in more than $2.5 billion in settlements and verdicts, according to the company’s website. With a nine-person team—including six former broadcast journalists—the company has produced more than 25,000 videos. A video can cost between $3,000 and $100,000, depending on the case’s complexity and the number of filming days.

“If you do a very good job in a day-in-the-life film,” Hegarty says, “a good defense lawyer will know they cannot try the case.” In fact, when officials from trucking company Schneider of Green Bay, Wisconsin, saw the Benning video, they settled out of court for $8 million.

Producing videos that stand up to court scrutiny takes careful choices. Only one camera is allowed. There is no directing the action. Lighting setups remain simple, and gels on the lenses are not permitted. Hours of raw footage are edited into a 15- to 30-minute piece.

Kolarik has no plans for retiring and still works 15-hour days.

“I’m married to my work,” she says. In fact, she plans to open bureaus in Boston, New York City, Washington, D.C., and Texas with funding from three law firms this year. “My dream is to have a bureau in every state in the union. “I still love the journalistic challenge of telling a story,” she says, “and it feels great when a lawyer calls to say we settled.”

This article originally appeared in the January 2016 issue of the ABA Journal with this headline: “Getting the Picture: Ex-TV newswoman’s videos tell the tale in personal injury cases.”