My Path To Law

Lawyer fights for human rights in the nation of Georgia 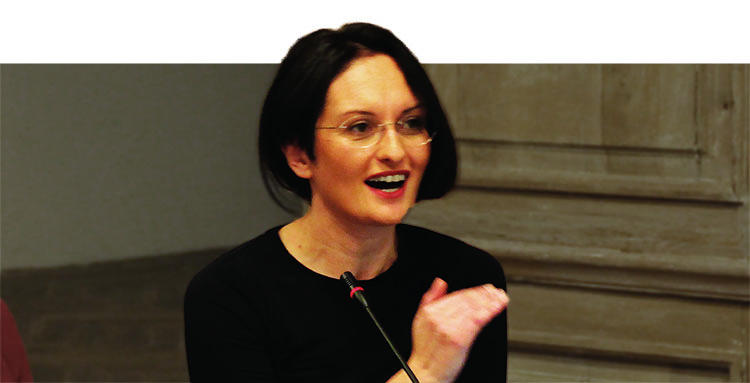 I clearly remember one of my first meetings with a victim of domestic violence that took place shortly after I was appointed as the first head of the Gender Equality Department at the Public Defender’s Office in the Republic of Georgia in 2009. The country had adopted a law against domestic violence three years earlier, but women still found it hard to speak up. We were sitting in a small dark room, face-to-face, tense and in silence.

At a certain moment, I realized that if I maintained my social image of a strong, educated, privileged woman, it would keep our worlds apart. This woman would never feel safe enough to share her traumatic experience with me. She would never seek help from someone who appeared stronger and thus unequal to her. But was I really stronger? Or did my strength come from hiding my own wounds and struggles with gender inequality behind a mask? I instantly decided to share my vulnerabilities first and then my personal experience with sexual harassment and gender discrimination—the reason I chose to pursue my legal career.

At the age of 31, with two children and a full-time job, I left my psychology and occupational therapy practices behind to go to law school. The reason for my decision after 10 years of hard work and sacrifice was that I felt worthless and powerless. I felt I had failed to reach my childhood dreams. I felt stuck by the limits imposed by others—specifically, that women in their 30s with children and obligations inside the home should not aim high.

Few people believed it was a reasonable decision, and even fewer supported it, but I persisted. During the entrance exams, I was asked to leave the room because everybody thought I was a parent, but I refused to leave.

After six years, I graduated with an LLB and a master’s in law. I continued to work full time, got my law license and started to represent people discriminated against on the grounds of sex, age, disability, gender identity and sexual orientation. My colleagues from the nongovernmental organization Partnership for Human Rights and I regularly visited psychiatric hospitals and institutions for people with disabilities, and fought against the unlawful detention of women and people with disabilities.

We represented the first members of the #MeToo movement in the Republic of Georgia and advocated for justice for women. In 2019, I received a Fulbright scholarship and am now studying at the University of Texas School of Law, where I am currently completing an LLM in human rights and comparative constitutional law.

Struggles as a lawyer

Being a female lawyer in Georgia is a constant struggle against stereotypes. Many people brag about our cultural traditions for respecting women in my country, but in reality, these traditions are used to marginalize women from community decision-making. Expectations of gender behavior limit women, who are expected to behave in a “womanly” manner during court hearings, which means your rebuttal should be “feminine,” and therefore you will likely lose.

Even female judges are perceived as ladies first and as judges second. A 2018 complaint submitted by my colleagues and me against gender-based harassment during hearings of the High Council of Justice, a body tasked with ensuring the efficiency and independence of the common courts, is still pending.

The work of human rights advocates in Georgia, particularly after the legacy of occupation and in light of what we see as continued Russian aggression, is challenging. As a lawyer, I stay in the conventional framework of the legal profession, filing lawsuits and participating in court hearings. But at the same time, I am aware of the ongoing political discourse. The memories of the authoritarian regime are so fresh that every action of the government implying potential threats against political and civil rights raises anxiety.

We, the human rights lawyers, are putting forth significant efforts to support the struggle of Georgian people to strengthen democracy and the rule of law and to demand free speech and fair elections. Our civil activism is not without sacrifice, though. Individual members of the ruling party in government and parliament openly campaign against nongovernmental organizations and civil society.

My colleagues and I have received politically motivated calls in attempts to limit our participation in the public discussions on the Draft Code on the Rights of the Child because of content in our public social media posts critical of the government. The smearing and derogatory comments against us were condemned by numerous human rights organizations.

One of the crucial initiatives my colleagues and I have been focused on in recent years is reform of the judiciary, which has been highly criticized by local human rights activists and by watchdog groups. We have been persistently advocating for the adoption of a legislative framework that would ensure an independent and transparent judiciary. We have been requesting transparent procedures for selecting and nominating supreme court justices and improving the ethics code and disciplinary proceedings in the judiciary. Advocating for judicial reforms involves risks, but we have no choice but to advocate for a well-established and trustworthy judicial system.

I am well into the second and final semester of my LLM studies at the University of Texas School of Law, and it is inspiring to be part of an educational system that focuses not only on knowledge but also on values such as justice and freedom. I have had the chance not only to listen and learn but also to observe how democratic institutions work in practice, how single judges can serve justice in the midst of political tensions, and how civil rights lawyers fight against all odds for what is just. Each class, which might seem like any other class to an American law student, is a continual source of inspiration to me.

After each professional responsibility class, I leave with ideas of how I can introduce new initiatives at the Georgian Bar Association; strengthen the ethics code; use the American Bar Association’s Model Rules for introducing the ethical legal representation of children in Georgia; organize women lawyers; and much, much more. After each evidence class, I know that my country needs to introduce an evidence code, including a shield law to protect rape victims.

Listening to my professor discuss First Amendment rights and constitutional law, the names Charles Schenck, Walter Chaplinsky and Robert Cohen immediately come to mind as they are currently fighting for free speech in the country of Georgia. My insecurities have disappeared, and my vulnerabilities are being transformed into strengths for seeking justice and contributing to strengthening democratic values in my home country. We have much to learn from the hard-won victories of the human rights lawyers who have come before us.

This article was originally published in the April/May 2020 issue under the headline, “Fighting for Human Rights in Georgia.”

Anna Arganashvili is a human rights lawyer from the country of Georgia pursuing an LLM at the University of Texas at Austin School of Law. She has represented the most vulnerable groups of society before the Georgia courts, with a focus on women’s issues and the #MeToo movement, as well as the rights of children and people with disabilities.