Kicking the IRS when it's down should be considered very, very carefully 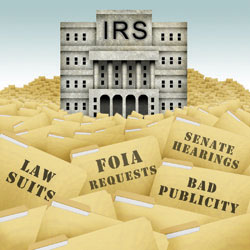 For many of us, the arrival of April means shaking off the winter malaise and looking forward to hearing the thwack of a fastball hitting a catcher’s mitt. It also means, however, that the income tax deadline is fast approaching. We may not like it, but the fact is we owe what we owe, and it’s the IRS’s job to collect it.

But if you have a beef with the IRS (and, let’s face it, you probably do), now might be the time to take whatever legal action you’ve been considering. Why, you ask? Well, because the much-maligned tax collection agency has been on something of a losing streak lately.

You might recall that in May of last year it was revealed the IRS had been giving (ahem) special attention to applications for tax-exempt status from organizations with conservative leanings, causing egregious delays in the process. The agency was roundly excoriated by people across the political spectrum.

Between the flurry of resultant lawsuits and the unfavorable publicity, it’s been a stormy ride indeed. In fact, one lawsuit, brought by the American Center for Law and Justice in May, has twice been amended to include 41 conservative nonprofit groups looking to bite back. The plaintiffs are seeking injunctive relief from “IRS abuse or retaliation,” according to the ACLJ website, as well as compensatory and punitive monetary damages.

In February the IRS got more bad news in the form of a thumbs-down on its attempt to regulate as many as 700,000 tax preparers, who would have been required to take a competency test and annual continuing education classes.

The program—supported by major national tax-return preparers—was widely seen as a way of driving up compliance costs for the smaller players in the industry. A three-judge panel of the U.S. Court of Appeals for the District of Columbia Circuit upheld a lower court ruling that the IRS lacks authority to impose new rules without congressional authorization.

And lately, even the average Joe is getting the upper hand on the IRS. William Berroyer Sr., 66, of Nesconset, N.Y., had a rather substantial tax arrearage in 2008 when he went to work out a deal at the agency’s Hauppage office on Long Island. The meeting went well, except for the part where Berroyer got up to leave and tripped on a phone cord. He fell and hit a file cabinet, and subsequently was treated for leg and shoulder injuries.

Berroyer sued the IRS, claiming a spinal cord injury and others that confined him to a wheelchair. The agency disputed the severity of Berroyer’s injuries and the credibility of his claims. But in January, U.S. District Judge Arthur Spatt awarded him $862,000—an amount nearly 15 times his tax bill. And, as if to rub salt in the agency’s wounds during this rough patch, Berroyer’s award is not taxable.

So poke that stick in the beehive if you must, but stirring things up is unlikely to land you in good stead. And remember to be ever so careful with your math—for the rest of your life.

This article originally appeared in the April 2014 issue of the ABA Journal with this headline: “Pile On (at Your Peril): Kicking the IRS when it’s down should be considered very, very carefully.”