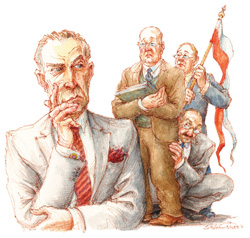 Mike Pirelli spotted Angus going into the First Federal Soup and Sandwich Shop and followed him in. “Angus,” he said, pulling a chair up to the table, “did you get a chance to read my deposition?”

“That’s great!” said Mike. “I really appreciate it. That’s my first expert deposition. How’d I do?”

Angus paused for a moment. Then he said, “The answer to that depends on what you were trying to accomplish. What were your goals in taking this deposition?”

Mike looked puzzled. “What do you mean, ‘goals’?”

“Well, this was the deposition of the defendant’s chief expert witness, Dr. Adleman,” Angus said. “Isn’t he saying that your plaintiff’s back condition didn’t come from the crash but rather from a slow degeneration of his spine?”

“So, under those circumstances, what were you trying to do in your deposition?” said Angus.

“Well, mainly I was trying to win,” said Mike.

“But my problem is,” said Angus, “I don’t know how you ‘win’ a deposition. Look at it this way: What you do with Dr. Adleman in trial is going to be at least partly based on what’s in his deposition, right?”

“And what’s in Dr. Adleman’s deposition is at least partly based on what you were trying to do.”

“Not that you’ll accomplish all your goals—nobody does,” said Angus. “But to reach any of them, you’ve got to have a plan. Like Yogi Berra said, ‘If you don’t know where you’re going, you might wind up someplace else.’ ”

Mike turned to me. “Jimmy,” he said, “did Yogi Berra really say that?”

I smiled. Angus was at it again. I pulled out my legal pad to take notes.

The typical deposition of an expert witness looks like preparation for a great contest—mano a mano—between lawyer and expert. Like the board game Stratego, each side lines up its pieces and then makes its moves, trying to capture the other side’s flag.

With an expert witness, the enemy’s hidden flag is the expert’s fatal flaw—some awful error of fact or analysis that, if discovered, spells an end to the game.

Where is it? Starting with the witness’s curriculum vitae, the questioner goes on and doesn’t stop until every factual and theoretical stone underlying the expert’s opinion has been turned over. Surely the flag is in there somewhere.

Only it usually isn’t. When there really is a flag—a fatal flaw that can destroy the other side’s case—it is usually apparent before the deposition if you’ve done your homework and gone over the case with your own experts. Then how and when you reveal the flag becomes one of the keys to your entire case strategy.

But instead of a flag, the typical product of an expert’s deposition is a carload of quibbles that lawyer and expert fight over in the trial to the boredom and annoyance of both judge and jury. What was meant to be mano a mano turns out to be “quibble a quibble.”

This doesn’t mean you shouldn’t be thorough—even exhaustive. But if all you do is hunt for the flag, there are too many other things you’ll overlook.

Besides learning the expert’s theory and its factual basis, other things you can do in a deposition include:

• Inquiring about the existence of other respected theories or approaches.

• Evaluating the witness on direct examination.

• Finding out what makes the witness angry.

• Asking what the witness did and was shown and told in preparation for the deposition.

• Evaluating the lawyers on the other side.

• Learning the opponent’s overall theory of the case.

Whatever your goals, there are steps that will help you reach them.

Do your homework. Discovery is the most time-consuming and expensive way to learn anything. Don’t make the deposition the start of your education in the expert’s field.

Streamline discovery. Instead of starting with depositions, use interrogatories to get the simple black-and-white details of an event, an injury, a product or a claim. There is nothing like an interrogatory to get names, dates, addresses, telephone numbers—things the other side has to give you that won’t require follow-up questions. But if you need to ask those questions, save them for the deposition.

Show the documents and the expert’s written report to your own expert to help identify soft spots in advance.

Then find out everything you can about the expert. Get his or her resumé. Read everything he or she has written. Find out how much courtroom experience the expert has, and whether he or she specializes in testifying for plaintiffs or defendants.

Even though you’ve learned a lot, when you get to the deposition, resist the temptation to show off. Despite the call of Mongo—your inner beast who would like nothing better than to kill the expert simply for being on the other side of the case—you don’t want to challenge the witness to a battle of wits. It’s almost always a mistake; and even when it isn’t, now is not the time.

Ask why. The question lawyers fear to ask on cross-examination is often the best one you can ask in a discovery deposition: “Why?” If you want to learn your opponent’s theory of the case, and get a sense of how well the expert can present it, ask “why” questions. The answers also will help tell you what to stay away from at trial.

Steal a trick from Deanne C. Siemer, managing director of Wilsie Co. in Washington, D.C., and a former general counsel for the Department of Defense whose book Tangible Evidence was published by the National Institute for Trial Advocacy. During a deposition, she asks the expert to help her understand difficult concepts. It gets the witness to open up and gives her a better idea of the witness’s real approach to the case.

Sometimes Siemer’s opposing counsel gets worried that the witness is giving her too much help and tries to turn off the faucet of information. That’s when Siemer uses “the wedge” between the witness and the other lawyer. “You’re not being fair to the witness,” she says. “He hasn’t finished his answer. Is there something else you wanted to say, doctor?”

Then the doctor, who’s tired of following the instructions to be terse and uncommunicative, forgets he’s supposed to “dance with the one who brought him” and opens up even more.

What does the expert read? Rule 803(18) of the Federal Rules of Evidence—the “learned treatise exception to the hearsay rule”—has made life a lot easier. You no longer have to get an expert to agree that a particular book or article is “authoritative” to use it to impeach the witness. Besides getting the witness to agree it’s authoritative, you can have your own witness do it or even get the judge to recognize it.

The setup for that impeachment starts in the deposition. Finding out what books the expert consults is something you can do in a friendly sort of way when you’re asking for help understanding a difficult area. And since the witness no longer has to say the book is “authoritative,” you don’t have to hop around trying to get the witness to say the exact right words.

Who is the expert’s hero? Everybody has a hero—someone he thinks highly of, whose ideas he listens to and whose opinion he respects. Asking who the expert witness’s professional hero is can be a natural road into what the witness reads. You may even go out and hire that person as your own expert witness.

Debrief yourself. Some of the most important things you learn in a deposition don’t show up in the transcript. Does the witness seem competent and prepared, or does he give the impression of shooting from the hip? Is the witness pleasant and helpful or condescending, argumentative and rude? Good or bad, those traits will probably show up at trial. You can even help that happen.

But those reactions, which seem vivid during the deposition, will melt into vague generalities within a few days. So right after the deposition ends, debrief yourself. Dictate notes on the witness’ strengths and weaknesses while they’re still fresh in your mind.

After Angus finished, he smiled at Mike and said, “Good job for the first time.”

The ABA Journal is occasionally reprinting some of Jim McElhaney’s most popular columns from past years. This article originally appeared in the Journal’s April 1997 issue under the headline “Exposing Fatal Flaws.”