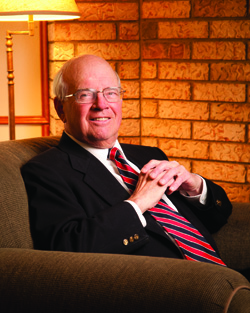 When I began my career as a litigator, I had several great mentors. But there’s only one I never met—James McElhaney. His tales of Angus, Beth Golden and “Mongo” were required reading for me, and taught me as much about trying a case as any number of seminars and CLEs. The highest praise I can give him is that I applied many of the lessons from his columns in trials—and won! Professor McElhaney, good luck and best wishes on your well-earned retirement.

While I relished “The World of McElhaney,” October, regarding the retirement of one of the ABA Journal’s most consistently valuable contributors, I could not rest without adding my personal thanks and appreciation.

Professor McElhaney taught the trial practice course at the University of Maryland Law School in 1969, when I was a law student—as clueless as most of the characters in the Angus journals. I even recall hiding potential witnesses in the downstairs bathroom at the school when it occurred to me that their testimony, on cross, would have clearly established the plaintiff’s case. Jim was kind in explaining that this “win at all cost” was really not what the practice of law was all about. Subsequently, I fondly recall playing (badly on my part) harpsichord and recorder duets at Jim’s home. He voluntarily taught classes at the University of Maryland School of Social Work, most of which were attended by my wife—who adored, and still adores, him. He truly was and is a man for all seasons.

I wish Jim good fortune in whatever he decides to do next, and want to thank him for his contribution to a profession we both love and try to protect.

I had the privilege of being a small part of the “World of McElhaney” during the summer of 1974 at Southern Methodist University law school. He offered a trial advocacy course for third-year students.

As mere second-year students, it was necessary for me and my best friend, Tim McCormick, now of Thompson & Knight, to plead our case to Professor McElhaney that he should make an exception for us and let us take his course. He not only granted our wish but also dubbed us the “gold dust twins,” a nickname that Tim and I still proudly use almost 40 years later.

McElhaney was always an enthusiastic, hilarious and knowledgeable advocate and teacher. I feel incredibly fortunate to have been one of his loyal and inspired students.

Jim’s genius is that he writes for the ear rather than the eye. Too many lawyers’ work product looks great on paper and sounds like crap. He has taught generations of lawyers not to say “more than one but less than three” when they mean two.

Have a great retirement, Jim and Penny! You’ve earned it.

Regarding “Clogged Pipeline,” October, about women skipping law school because of lack of growth at firms: I think that law schools, as well as law firms and other employers, could do a lot more to help women (and men!) feel as though they can manage both a legal career and raising a family.

As a recent law school graduate, I feel very daunted by the prospect of having kids while launching my career and repaying my loans. There are very few part-time opportunities, and almost every position available is incredibly time consuming and energy intensive. The entire profession needs to be overhauled to support a healthier, more balanced lifestyle for law school graduates. Both law schools and employers could undertake efforts to encourage this transition.

Unfortunately there is very little emphasis on work-life balance in this profession, which is a great shame. I think we would have better, more efficient and more empathetic lawyers (and policymakers) if we had more time to spend with our families, communities, etc. It isn’t just women who are negatively affected by the lack of balance. Men should also be given an opportunity to raise families and pursue other interests.

Finally, maybe if we spread the work around there would be more jobs for people with law degrees. It is stunning how unemployment is such a problem for recent law grads, and yet those who do have jobs are completely overworked (and often overpaid). Why not have a system in which lawyers make less money but have more time? I’m sure we’d be happier overall, and the entire legal system would benefit.

A DOSE OF PERSPECTIVE

Regarding “Bad News Gets Worse,” September: There seems to be no end to the whining about the job market for lawyers, and your graphics make it look like a long drop into the abyss, when actually the numbers have just declined from 92 percent at the highest ever to 85 percent now.

Let me put things into a different perspective. I studied law in Germany in the 1980s (and things are worse there now). From my class of about 900 students, a full third never graduated after four to five years of studies because they were failed in the final exams. Of the remaining 600 or so, the rule of thumb was that the top third (about 200 of the initial 900) had choices, the middle third had a job, and the bottom third had a problem. That would give you a success rate of less than 50 percent—in Germany. And that was one of the better places to be in Europe and in general.

I have taught courses for credit in more than a dozen countries, have lived on three continents and have otherwise worked in over 60 countries around the world, and I don’t know whether there is a single country outside the U.S. where about 85 percent of law graduates year after year actually find employment related to law.

OK, in most of these countries the students facing really bleak perspectives in the job market—much worse than here—do not graduate with $100,000 in student debt. However, I would personally much rather pay $100K for a great education and an 85 percent chance at finding a job than spend less money but still five years of my life on a mediocre education and an almost elusive chance at finding employment.

You and your writers are creating a great drain on my time. Previously, it took less than 10 minutes to read the Journal—mainly I read McElhaney on Litigation and paged through the rest.

Now it takes far longer because the articles are fresh and interesting, covering much more varied subjects in greater depth.

I guess I should say thank you.