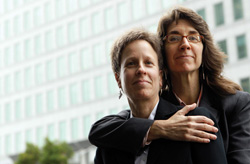 Gay marriage may move from the political agenda to the U.S. Supreme Court docket this fall when the justices are expected to consider whether to accept two major cases on how the law treats same-sex couples.

But unlike the boisterous debates among candidates, the court’s examination promises to be a relatively understated affair because neither case answers the root question of whether the federal Constitution grants a right to gay marriage.

In one case, the question doesn’t arise, and in the second case the judges bent over backward to confine it to a single state.

While a substantive federal constitutional right to marry isn’t at issue, appeals courts in Boston and San Francisco have laid the analytical foundations that could prove significant in providing the answer.

It also means that, as they seek cert, the two sides probably will look again to the quintessential deciding vote that again may reside with Justice Anthony M. Kennedy, author of the court’s last two decisions on issues affecting gays.

The first case was decided May 31 when the 1st U.S. Circuit Court of Appeals at Boston became the first appeals court to hold unconstitutional a section of the 1996 Defense of Marriage Act. The challenged provision denies legally married same-sex couples federal benefits available to other couples. Seven jurisdictions permit gay marriage.

The plaintiffs in Gill v. Office of Personnel Management sought federal health insurance coverage for spouses, Social Security benefits and joint income tax filing status. Republican leaders in the House of Representatives filed a petition for writ of certiorari on June 29 asking the high court to take the case.

The second decision emerged on June 5 in the San Francisco-based 9th Circuit when the full court refused to rehear a Feb. 7 decision striking Proposition 8, a voter-approved state constitutional amendment that banned same-sex marriage. As the 1st Circuit did with the denial of benefits, the 9th Circuit in Perry v. Brown held the ban violated equal protection.

Because it’s confined to a situation unique to California, Perry is considered the weaker candidate for Supreme Court review. Seven DOMA challenges remain, including one the Obama administration wants the justices to take straight from the district court when they convene for the new term in October.

“What we’ve been told from day one was that if there were a ruling finding DOMA unconstitutional, it will inevitably be taken by the court,” says Gill plaintiffs lawyer Mary L. Bonauto, civil rights project director for Boston-based Gay & Lesbian Advocates & Defenders.

A court couldn’t decide on a right to marry in Gill, even if it wanted to. That’s because the plaintiffs in the case already are married under state laws.

The 1st Circuit panel still struggled to answer the benefits question before it. Historically the Supreme Court has treated race, religion, ancestry and gender as “suspect classifications,” and it reserves its two toughest formulas to examine measures burdening them, as well as those affecting fundamental rights.

The justices never have recognized a suspect classification based on sexual orientation, even though they’ve had the chance to do so at least twice since the 1990s.

Race, religion and ancestry fall under “strict scrutiny,” where the government must justify a law through a “compelling interest” achieved by the “least restrictive means.” Gender distinctions fall under “intermediate scrutiny,” requiring that a measure be “substantially related” to serving an “important” government interest.

Neither was available to the 1st Circuit panel, which found it was restricted by its own case law and Supreme Court precedent. Moreover, had the panel created a new classification, Judge Michael Boudin worried it also could have the unintended—and improper—effect of implying a constitutional right to marry, throwing into jeopardy same-sex marriage bans in the 38 states that have enacted them. The lower federal courts remain bound by the Supreme Court’s 1972 summary dismissal, for lack of a federal question, of a challenge to Minnesota’s refusal to recognize same-sex marriages.

“That such a classification could overturn marriage laws in a huge majority of individual states underscores the implications,” Boudin wrote.

Also unsatisfactory for the panel was the rational basis test, usually used in commercial and tax legislation. It allows the government to justify a law with just about any plausible reason, even one unrelated to the law’s subject matter. So both Boudin and 9th Circuit Judge Stephen Reinhardt turned to a series of decisions involving disadvantaged groups, including the poor and the mentally impaired, where the high court declined to create new suspect classifications but nevertheless scrutinized the claims more closely. Included was Romer v. Evans, a 1996 Kennedy opinion that invalidated an attempt by Colorado to block regulations to protect gays from discrimination. In 2003, Kennedy also used due process in Lawrence v. Texas to toss a state statute that criminalized homosexual sodomy.

On a court defined by factional 5-4 decisions with Kennedy usually in the middle, his vote could be more significant than usual this time around. Justice Elena Kagan could wind up recusing herself if she worked on DOMA cases while she was solicitor general for President Barack Obama. Kagan typically sides with the court’s four-member liberal wing, so her recusal without Kennedy’s vote could leave that faction one vote short.

Kennedy was able to find the Colorado measure violated equal protection without resorting to any new classifications or declaring new rights. The law was so bad that Kennedy could only presume that hostility toward gays motivated it—which falls outside rational basis analysis. Colorado “fails, indeed defies, even this conventional inquiry,” he wrote.

The same goes for DOMA, Boudin said, though he declined to say that homophobia motivated Congress when it passed the law. Still, he said, DOMA’s effects on gays and its intrusion into state territory warrant “closer than usual review.” DOMA for the first time also offers a federal definition of marriage that mirrors most state definitions as a relationship between one man and one woman.

“In areas where state regulation has traditionally governed, the court may require that the federal government interest in intervention be shown with special clarity,” Boudin wrote.

In early July the Obama administration filed its own cert petitions with the court for the Boston case and for Golinski v. U.S. Office of Personnel Management, a California district court case still pending in the 9th Circuit. This time, the administration urged the court to strike the law using “heightened scrutiny,” similar to the “closer than usual review” advanced by the 1st Circuit.

Rational basis review alone may not have killed DOMA in the 1st Circuit. Boudin conceded that DOMA could survive a typical rational basis argument that limiting benefits saves tax dollars. But after the administration returned to the case, that rationale fell by the wayside, along with points largely extolling the benefits of raising children in heterosexual marriages.

“The basic question is whether a child should have both a mother and a father, and a stable environment,” says amicus Dale Schowengerdt, counsel for the Scottsdale, Ariz.-based Alliance Defending Freedom, a network of about 2,200 Christian lawyers who donate their time to cases dealing with gay rights and family issues. But those motivated by religion may need to wait.

The House excoriates the Justice Department for piling on with more litigation while still enforcing DOMA. But it saves most of its vehemence for the 1st Circuit’s proposed standard of review for sexual orientation.

The 1st Circuit “embraces an entirely novel approach to constitutional equal protection analysis,” the House argues in its petition. “It is hard to imagine a stronger candidate for this court’s review.”