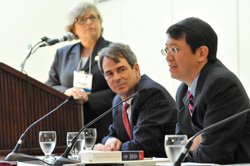 If there is significant opposition to the U.S. war on terror, it wasn’t apparent in a roomful of lawyers at one annual meeting program. Salli Swartz, outgoing chair of the ABA Section of International Law, mentioned xenophobia and a “mass intrusion on privacy” as she moderated “9/11—A Decade Later and a World Apart.” But panelists didn’t take the bait.

Civil liberties can’t be preserved “if there is chaos and deep-seated fear,” said Jamie Gorelick, a partner at Wilmer Cutler Pickering Hale and Dorr in Washington, D.C., who served in the Clinton administration as deputy attorney general and as general counsel of the U.S. Defense Department.

Ivan Fong, general counsel of the U.S. Department of Homeland Security, echoed that view. Security is needed to protect America’s values, ideals and way of life, he said. His personal view is that terrorism will eventually be defeated. But he warned that Americans still need to be prepared for another terrorist attack—and resilient in its aftermath.

REVISING LAWS FOR A NEW REALITY

The audience was no less supportive of U.S. policies in response to a question by John Bellinger III, the former top legal adviser for the U.S. State Department during the George W. Bush administration. His query: If the U.S. military captures a terrorist fighter on the battlefield in Afghanistan, should the detainee be tried in civilian courts in the United States?

Out of more than 150 people attending the program, just one raised a hand to indicate a yes answer. “There are two of us,” Swartz said as she also raised her hand.

Bellinger, a partner at Arnold & Porter in D.C., used the question to illustrate his point that traditional domestic laws don’t apply when the U.S. is battling terrorist outsiders. “We can’t send our military into Afghanistan armed with arrest warrants,” he said.

Bellinger said laws need to be revised to take account of new realities. The Geneva Conventions were enacted to govern conflicts between standing armies. A 10-year-old law authorized “necessary and appropriate force” to battle Sept. 11 attackers and their supporters, but it’s outdated and left too much to the courts to decide.

Swartz, a partner with Phillips Giraud Naud & Swartz in Paris, responded with a question that also appeared to be a suggestion. Should the ABA convene a national group of experts, she asked, to think about a new Geneva Convention? None of the panelists objected to the idea.