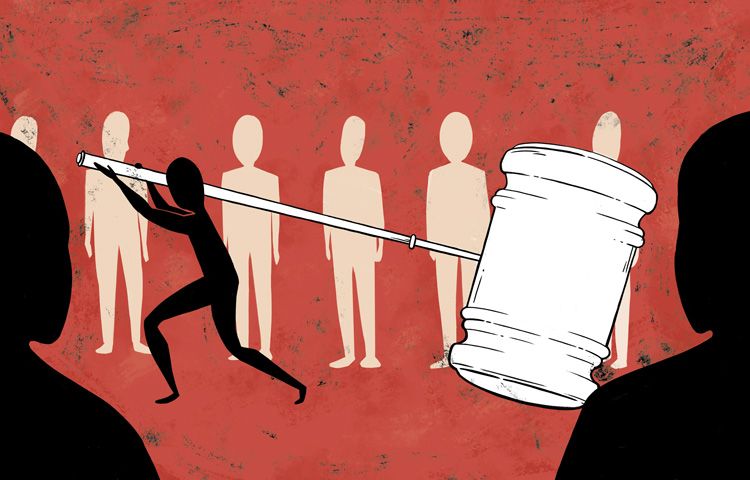 Gerry Handley faced years of blatant race-based harassment before he filed a complaint against his employer: racist jokes, signs reading “KKK” in his work area, and even questions from co-workers as to whether he had sex with his daughter as slaves supposedly did.

Handley (a pseudonym) had an unusually strong case with copious documentation and co-workers’ support, and he settled for $50,000—even keeping his job.

But victory came at a high cost. Legal fees cut into Handley’s winnings, and tensions surrounding the lawsuit poisoned the workplace. A year later, he lost his job due to downsizing.

Handley exemplifies the burden plaintiffs bear in contemporary civil rights litigation. In the decades since the movement, we’ve made progress—but not nearly as much as it might seem.

On the surface, America’s commitment to equal opportunity in the workplace has never been clearer. Virtually every company has anti-discrimination policies in place, and there are laws designed to protect these rights across a range of marginalized groups.

But our examination of nearly 1,800 civil rights cases and interviews with parties and their lawyers shows that this progressive vision of the law falls far short in practice. When aggrieved individuals turn to the law, the adversarial character of litigation imposes considerable personal and financial costs that make plaintiffs feel like they’ve lost regardless of the outcome of the case. Employer defendants also are dissatisfied with the system, often feeling “held up” by what they see as frivolous cases. And even when the case is resolved in the plaintiff’s favor, the conditions that gave rise to the lawsuit rarely change.

In our book, Rights on Trial: How Workplace Discrimination Law Perpetuates Inequality, we offer a comprehensive analysis of the system of employment civil rights litigation, using both statistical data from a large random sample of cases and in-depth interviews with plaintiffs, plaintiffs lawyers, defendant employers and defense lawyers about their experiences with and perspectives on discrimination lawsuits. All the names of interviewees we use are pseudonyms as part of our human subjects protection protocol.

With support from the American Bar Foundation, the National Science Foundation and the Searle Foundation, we sent teams of research assistants to federal records centers to code the characteristics of a random sample of employment civil rights cases filed over a 15-year period—1,788 cases in all.

Most research on discrimination litigation examines only cases that generate published opinions. Such research leaves out the vast majority of cases that do not generate opinions, leaving analysts to study “the iceberg from its tip” (a phrase coined by colleagues John Donohue III and Peter Siegelman).

After performing statistical analyses on case outcomes, we drew a random subsample of cases in the four major types of claims (race, sex, age and disability) and four case outcomes of greatest theoretical interest (dismissal, early settlement, late settlement and trial). We then conducted in-depth interviews with parties and their lawyers. The interviews were recorded, transcribed and analyzed. This combination of data generated many findings that run counter to common mis-understandings about employment discrimination litigation.

Myth 1. Employment discrimination is a thing of the past.

While public opinion data shows Americans are now much less prejudiced on the basis of race and sex, and while the crudest forms of such segregation have been eliminated from the American workplace, several studies demonstrate that employment discrimination persists. Among the most striking, a 2007 study by Harvard University sociologist Devah Pager found that black men without a criminal background were less likely to receive a callback for a job interview than white men with a criminal background.

Myth 3. Targets of discrimination are quick to sue.

Taking the example of race discrimination claims, we estimate that only about 1 percent of African-American workers who perceive they have been discriminated against at work in the last year file a charge with the Equal Employment Opportunity Commission. Our research shows that, across different types of plaintiffs, less than a quarter of EEOC charges lead to the filing of a lawsuit.

Myth 5. A large proportion of employment civil rights claims are brought as class actions or with the intervention of the EEOC.