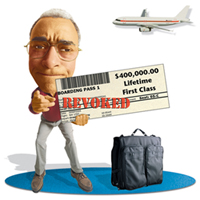 Apparently the sky’s the limit when it comes to airlines charging fees—$15 to check a bag, $20 to choose an aisle seat, and don’t forget the infamous obesity tax.

“A second package of nuts? Certainly. That will be $4.”

Most of these revenue enhancers were attributed to record-high fuel costs, but now that oil prices have taken a free fall, what’s to blame?

If any of a recent spate of lawsuits against the beleaguered carriers is successful, you can be certain the airlines will claim suits are behind the higher fees.

Steven Rothstein is an Illinois man who paid $250,000 in 1987 for a lifetime pass to fly first-class anywhere in the world for the rest of his life.

Sure, he took a gamble that he wasn’t going to get hit by a bus while crossing the street the next day, but it seemed to be paying off for him. In fact, he was so pleased with the deal that two years later he paid an additional $150,000 or so to be able to take a companion along.

So what’s the problem? American Airlines—which claimed Rothstein was making “speculative reservations” that were often canceled at the last min­ute—voided the pass.

Rothstein, 59, sued in May in the U.S. District Court for the Northern Dis­trict of Illi­nois for breach of contract, figuring AA owes him $7 million for all the first-class travel he can squeeze into his remain­ing lifespan.

“No, ma’am, we no longer distribute free blankets. Would you care to purchase one with our logo on it?”

At the opposite end of the passenger spectrum, a college student from Madeira, Ohio, is looking to clip the wings of US Airways after, he claims, a videogame console was removed from his luggage.

But this wasn’t just any video­game console. This, says Jesse Maiman, was an Xbox 360 with a specialized hard drive and components worth more than $1,000.

It seems his suitcase felt a tad light when he re­trieved it, and he soon found out why. Maiman’s lawsuit states that he spent weeks getting an “unconscionable run­around” while seeking restitution.

Maiman filed suit in March in Hamil­ton County Common Pleas Court, seeking $1,700 for the gaming system and payment for “noneconomic distress” of at least $25,000, or up to $1 million should the court deem it appropriate.

“I’m sorry, sir, we no longer serve free soft drinks. Could I interest you in a $6 Bud Light?”

And even as airlines—in between instituting new fees—find themselves fending off attacks from customers, they’re getting kicked in the tarmac by their own employees.

A JetBlue flight attendant served the airline with a workplace harassment lawsuit, claiming she was de­nied entry on a Delta flight—Delta has an arrangement to ferry JetBlue employees to worksites—because she wasn’t dressed provocatively.

Karin Keegan, 37, of Pittsburgh filed the suit in January in federal court in the Western District of Pennsylvania. Her attorney is Samuel Cordes of Pittsburgh.

He says, according to press reports, that the male em­ployee insisted Keegan “change to a lower-cut shirt and tighter pants” before he would consider allowing her to board.

No details were available at press time on the damages Keegan is seeking.

Now, who’s the victim here and who’s the cause of the fee spree? That’ll be for the courts to decide. In the meantime, let’s discuss it over drinks at the Admirals Club.