Racial disparities in maternal mortality are exacerbated by COVID-19 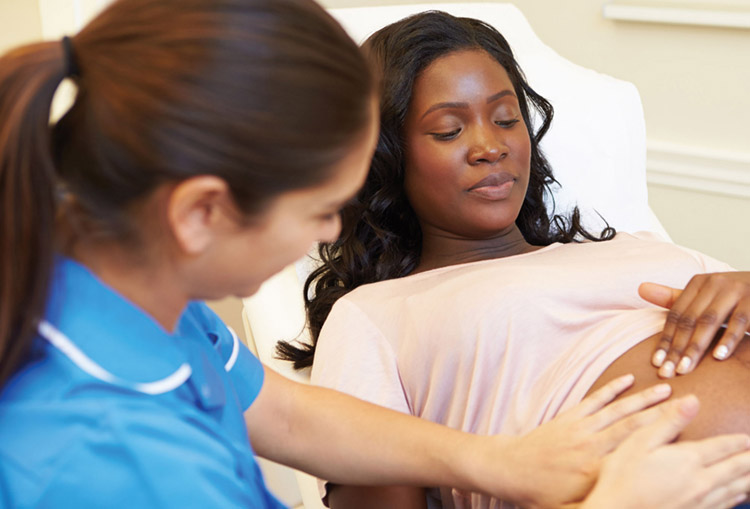 New concerns about maternal risks in pregnancy emerged as COVID-19 plowed its way across the country this year. In April, New York Gov. Andrew Cuomo convened the COVID-19 Maternity Task Force to look at alternative facilities for delivery. In May, the Association of Maternal & Child Health Programs called on Congress to fund research on the pandemic’s effect on pregnancy.

These proposals followed news reports about 26-year-old Amber Rose Isaac, a pregnant woman of Black and Puerto Rican heritage who was admitted to a hospital in the Bronx in April with complications from the pregnancy-related HELLP syndrome, a rare life-threatening condition named for its characteristic hemolysis, elevated liver enzymes and low platelet count. Because of COVID-19 restrictions, Isaac’s partner and mother were prevented from being with her as she was rushed for an emergency cesarean section. Isaac delivered a son, but she did not survive.

While COVID-19 was not implicated in Isaac’s death, the disparate impact of the virus mirrors the stark reality of maternal mortality across the U.S. The COVID-19 death rate for African Americans is double that of whites, according to the Centers for Disease Control and Prevention. The latest maternal mortality statistics released in September 2019 bear the same markers of disparity: They show that Black women in the U.S. are three times as likely to suffer a pregnancy-related death—and Native American women twice as likely—as Latinas or white or Asian women.

Maternal mortality across the spectrum shows stunning increases in the United States. The number of deaths has risen while declining in almost every other nation. Pregnancy-related fatalities—about 660 per year—rose in the U.S. from 9.8 per 100,000 live births in 1989 to 17.4 deaths per 100,000 in 2018, putting the country at the bottom of the list of the world’s wealthy nations.

From tragedy to advocacy

Statistics certainly were not on the mind of Judge Glenda A. Hatchett when she flew to Los Angeles in 2016 to be with her son and daughter-in-law as they delivered their second child. Hatchett, the founding partner of the Hatchett Firm in Atlanta, became Georgia’s first African American presiding judge of a state court in 1990, and she is widely known for her years on courtroom television. Her daughter-in-law, Kira Dixon Johnson, was scheduled for a C-section, and the family rejoiced when a healthy boy was born.

Soon after the delivery, Kira, an accomplished linguist and avid runner, began experiencing extreme discomfort. Hospital personnel brushed off her distress, and when Kira returned to the operating room 12 hours later, the surgeon found more than 3 liters of blood in her abdomen from internal bleeding.

Hatchett was babysitting for the couple’s firstborn at their condo. “At about 2:30 a.m., my son called and said, ‘Things have gone terribly wrong. Please pray,’” Hatchett says. “About 4 o’clock, the door opened to the condo. He said, ‘Mom, she’s passed.’ I can’t even begin to tell you what that meant at the moment. It was just unbelievable,” Hatchett says.

Only after that did Hatchett become familiar with the disparate maternal deaths of Black women occurring across economic, social and educational levels. When Hatchett’s son, Charles S. Johnson IV, founded the nonprofit advocacy group 4Kira4Moms, Hatchett joined him in lobbying Congress to address the issue.

But that was only the beginning—at least 14 legislative proposals on maternal mortality have been introduced in the 116th Congress, extending public health care benefits to a woman for a year after delivery, setting protocols and ensuring more assistance to pregnant people.

The exact causes of maternal mortality—defined by the CDC in its latest report as maternal deaths occurring during pregnancy, delivery and up to 42 days post-partum—arise from a web of cultural and medical factors. About 60% of these deaths are preventable, according to the CDC.

“With pregnancy comes a list of things that would never have happened but for the pregnancy,” says Joseph W. Balesteri, a partner at Power Rogers in Chicago who specializes in plaintiffs medical malpractice. He lists hypertension, bleeding, preeclampsia, HELLP syndrome, stroke and heart failure.

In one of his maternal death cases, blood clots in a woman’s legs went unnoticed and traveled to her pulmonary system during delivery. “When it happens, the worst day in a child’s life is their birthday,” Balesteri says.

“In the factorylike events of labor and delivery at a hospital, [the doctor’s] job ends with delivering the baby, and everyone leaves and goes to the next delivery. There might be a mom having the first evidence of bleeding, and everybody is doing their work elsewhere,” Balesteri says.

The best preventive care comes when hospitals implement emergency policies and procedures and conduct training for the staff, including role-playing and incident preparation that can help avoid fatalities. Hospitals are prodded to act when the Joint Commission, a health care organization accrediting agency, makes it a priority, he adds.

This hands-on training is exactly the type of work being done by Dr. Lisa Hollier, former president of the American College of Obstetrics and Gynecology and chief medical officer of obstetrics and gynecology for the Texas Children’s Health Plan. “This is a complex area—there isn’t a single cause,” says Hollier, who is the chair of the Texas Department of State Health Services’ Maternal Mortality and Morbidity Task Force.

With heart failure as one identifiable cause of maternal distress, Hollier developed “patient safety bundles” to help hospital personnel to act quickly if a problem arises. Even during the pandemic, Hollier has conducted virtual training with the American College of Cardiology on protocols to optimize heart teams in maternal care.

Researchers of medical history see the disparate racial impact as part of a larger cultural pattern of “obstetric racism,” in the words of social scientist Dana-Ain Davis, author of Reproductive Injustice: Racism, Pregnancy, and Premature Birth. “Historically, Black and brown bodies are seen as good for experimentation but not good for saving. The Black body is not a body that has protection,” Davis says, citing experiments conducted on people of color for syphilis and birth control.

The expanded use of cesareans, which has increased from 5.5% of deliveries in 1970 to 31.9% in 2018, is one factor University of California at Irvine School of Law professor Michele Bratcher Goodwin identifies as contributing to maternal mortality.

“Oftentimes, these are matters of surgical missteps, along with underlying institutional and structural problems that result in the failure to appropriately care and respond,” Goodwin says.

An American Law Institute adviser on torts, Goodwin believes states such as California that have capped medical malpractice claims create an impediment to accountability and improvement of care.

“We ought to think about what is the proper tort remedy for families that suffer the loss of a loved one due to medical neglect,” she says.

Goodwin, who this year released the book Policing the Womb, also believes supporting maternal health will require a reversal of anti-abortion regulations that shutter women’s clinics, often the only local outposts for prenatal care.

“For all the talk about pregnancies, there isn’t a moral, social, economic commitment to keeping women safe,” Goodwin says. “We’ve lost so much time toward saving women’s lives.”

This story was originally published in the October-November 2020 issue of the ABA Journal under the headline: “Lawyers Tackle Maternal Mortality: Racial disparities are exacerbated by COVID-19”