ReInvent Law's message is change for the client's benefit 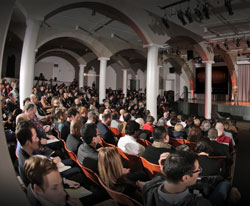 Lawyers need to embrace technology, can’t be afraid to try new things, and must focus primarily on improving their clients’ experience.

Those were the main takeaways from the ReInvent Law conference held in New York City in February. More than 800 lawyers, academics, business owners, students and others in the legal industry packed into the Great Hall at New York City’s Cooper Union for the event, sponsored by the ABA Journal, Michigan State University College of Law and the Ewing Marion Kauffman Foundation.

Founded by MSU law professors Daniel Katz and Renee Newman Knake, ReInvent Law brought people from the United States, Europe and Australia into a frank exchange of ideas about the need for innovation in the legal industry.

Nearly 40 lawyers, startup owners, academics, entrepreneurs, students and others in the legal industry took the stage to give short talks on topics such as price transparency, use of data analytics, emerging technologies, three-dimensional printing and computable contracts.

The talks ranged significantly in quality and tone. Lisa Damon, Boston-based labor and employment chair at Seyfarth Shaw, went the inspirational route, imploring her fellow attorneys not to be afraid of burning down the house and rebuilding from scratch.

“I love to blow things up—the bigger, the better,” said Damon, whose talk was titled “Confessions of a Pyrotechnician.” Damon spoke about her role in implementing Six Sigma principles into Seyfarth Shaw’s operating plan and urged lawyers to follow their passions, because that’s where innovation comes from. “Don’t be afraid to fail,” Damon told the audience. 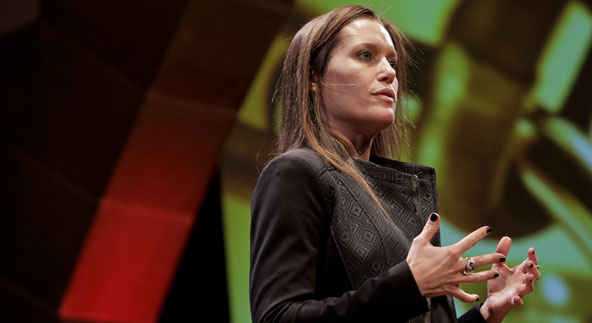 Much of the discussion focused on the need for firms to ditch the old business model of billable hours. Mark Chandler, general counsel of Cisco, spoke of the changes his company had to make after the economic downturn. It changed its compensation structure so that firms had incentive to get work done as efficiently as possible. Additionally, Chandler embraced technology and automated as much work as possible as a way of reducing costs.

Other GCs agreed, arguing that lawyers needed to focus on delivering better services to clients. Susan Hackett, chief executive officer of Legal Executive Leadership, and Jeffrey Carr, general counsel of FMC Technologies, said it was incumbent on general counsel to take the lead in forcing outside counsel to adopt new business models and innovative technologies.

Technological advancements also played a large role at the conference. Several of Katz’s students touted new and existing ones and argued that lawyers could improve their practices by adopting them.

Kristen Kolakowski-Godin said attendees should embrace predictive coding, which could save millions by cutting down on document review time. Chase Hertel spoke of how innovative law firms can use the cloud to provide better service to millions of immigrants who aren’t being served by law firms now. And in a presentation that generated plenty of controversy on Twitter, Andy Ninh talked up Google Glass and how lawyers could use it for everything from time and billing management to recording depositions to getting information on jurors during voir dire.

Other criticism of the event centered around the lack of practicing attorneys speaking from the stage. According to several commentators on Twitter, there were few BigLaw attorneys present—perhaps unsurprising given the tone of several speakers, including FMC’s Carr, who said that “BigLaw is irrelevant; they won’t be the source of the change because they are in the business of billing hours.” Of the speakers, only two came from Am Law 200 firms. Meanwhile, others noted that many speakers were from legal startups and spent much of their allotted time talking about their companies and products. “Is #reinventlaw for practicing attorneys or legal tech startups?” tweeted LegalTypist.

Katz says the criticism over the lack of practicing attorneys was unfounded: “In terms of the composition of the conference, we wanted to have a mix of practicing attorneys, general counsel and legal startup founders.” He says the conference was geared toward forward-thinkers who already understand that innovation needs to occur within the legal industry immediately.

“It wasn’t about trying to convince laggards or the late majority because the market will do that,” Katz says.

He also notes the explosion in the legal startup market over the last five years. “In 2009, there were 15 legal startups,” he says. “Today there are over 400.”

Katz says he wishes there had been more lawyers or companies with innovative techniques or technology present at the conference. “The difficulty is that folks have demands on their time,” he says. “It’s part of why we plan on posting videos to our website. People can enjoy watching them after the fact and at their convenience.”

The next ReInvent Law event will be in June in London. According to Katz and Knake, that event will focus more on issues relating to the United Kingdom’s legal market.

This article originally appeared in the April 2014 issue of the ABA Journal with this headline: “Love Tech: ReInvent Law’s message is change for the client’s benefit.”