Some HOAs act as though their bylaws are etched in stone 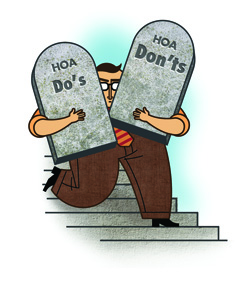 There’s a mindset that craves the acquisition of any kind of authority and takes full—even excessive—advantage of it. Individuals afflicted with said mindset tend to amplify the significance of insignificant matters and insist, with plenty of bluster, that things be done their way (think Deputy Barney Fife from the 1960s Andy Griffith Show).

And the only thing worse than an individual who handles matters this way is a committee that does—or an association, as in homeowners association.

Intended to make life easier for residents by acting for the common good, homeowners associations typically provide services and regulate activities for various types of housing developments. But some HOAs can be real sticklers for detail, and they sometimes require a degree of conformity that residents consider oppressive. If no compromise can be reached, it’s often “See you in court.”

That’s how it went for Becky Rogers-Peck of Augusta, Ga. As a Christmas gift to her 4-year-old granddaughter, Rogers-Peck had a small, wooden playhouse built in her backyard in 2011 and painted pink. Complaints from neighbors caused the Mills Haven HOA to step in and order her to paint it a color more complementary to her home.

Rogers-Peck, a former HOA board member, insisted that the playhouse was different from other backyard structures, like sheds and garages, and cannot be seen from the street. She refused to repaint; the HOA stood firm and filed a lawsuit in August.

“Part of the approval is the color,” Susan Bradley, the HOA president, told a local news outlet.

Rogers-Peck was prepared to stand her ground to the end, but in October the lawsuit was dropped and the playhouse will remain pink. Mineola, Texas, was the site of another backyard brouhaha, only this time the offending structure was a swingset. A nice one, too, with a slide, two ladders and a deck, and anchored in concrete footings. Candi Fry had it built in 2011 for her kids and those of her new husband, Bill. In August 2011, while Bill was deployed to Afghanistan in the Army National Guard, Candi was served with a lawsuit from the Spring Lake HOA, stating that the proper permission to build the swingset was not applied for, that it was visible from the street, and that it had to be taken down or moved.

The Frys told a local reporter they got verbal approval for the project from two board members at different times. The couple offered to move the swingset if the HOA would split the cost and cover their attorney fees. The association refused. The case was dismissed in September.

But those two tales tend to pale in comparison to a Roxborough Park, Colo., HOA that effectively appointed itself cop, judge and jury.

The HOA recently purchased a laser radar gun and announced its intention to issue tickets and assess fines to drivers who exceed posted speed limits. Leadfooted residents who refuse to pay could rack up penalties and ultimately face foreclosure.

In many cases, an HOA does have broad authority to create and enforce rules that homeowners contractually must agree to if they decide to live within its jurisdiction. But when an HOA starts to overreach, then it might be time to, as Deputy Fife would say, “Nip it in the bud.”