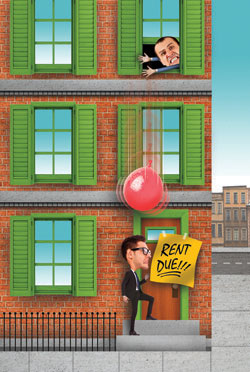 The landlord/tenant relationship can sometimes be fraught with tension, and arguments tend to center around issues such as pet policies, noise levels and cleanliness. These disagreements can usually be settled amicably, but lately some landlords have chosen to think outside the lease agreement and get what they want in decidedly uncivilized ways.

In what appeared to be a pattern of strong-arm scamming, a St. Charles, Mo., landlord was charged in December with three counts of third-degree assault. In the span of about five months, Charles McKee, 50, allegedly picked fights with tenants and then called the cops to have them removed from the property. Those tenants told police that McKee did not return their rent money and security deposits, despite his promises to do so.

In February, another landlord reportedly expressed displeasure with his tenants, but in an even more aggressive way. Buster Mokuohai of Thurston County, Wash., is alleged to have shot up his tenants’ home with a pellet gun and damaged the front door with a chainsaw. One tenant reported being hit in the back with shots from the pellet gun. Mokuohai was taken into custody and charged with two counts of burglary, assault and malicious mischief.

But a Waynesville, Ohio, landlord, in January, came up with a way to settle a score with a tenant that wasn’t just uncivilized and aggressive—it was downright creepy.

Now, we all know there are many legitimate options for collecting money owed—one can hire a debt-collection agency, go to small claims court, hire a mediator or even put a lien on the debtor’s property. Ho-hum, right? Why settle for a sterile, antiseptic method of getting your dough when you can humiliate and beat it out of someone?

Ron Kronenberger had a tenant who owed him $2,800 in overdue rent. According to reports published in the Dayton Daily News, he and the 29-year-old male tenant were arguing about it when Kronenberger, 53, said to him, “If you’re going to act like a child, I’m going to treat you like one.”

Kronenberger—aka Waynesville’s 2006 Citizen of the Year and a former Chamber of Commerce president—reportedly demonstrated what he meant as he ordered the tenant to drop his pants and then spanked his bare buttocks four times with a belt to teach him a lesson about getting behind in the rent, so to speak.

The tenant, according to a police report, said “he was scared and just wanted to get it over with.” Kronenberger was charged with misdemeanor assault. The victim and his wife indicated that they would be consulting an attorney.

In March, Kronenberger was granted diversion in Warren County Court, with the stipulation that he was to have no further contact with the victim for six months and do nothing else to warrant the attention of the court.

Since Kronenberger seems to have such a keen interest in, ahem, arrears, it only seems fair that tenants should have a crack at giving him a dose of his own medicine should he be slow to fix a dripping faucet or patch a leaky roof.

But, on second thought, why be cheeky about it?