The Conspirators: Tried by Military Commission 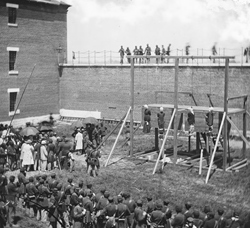 The hanging of four conspirators, convicted in the assassination of Lincoln, on July 7, 1865. Photo by Alexander Gardner (Library of Congress)

From May 12 until June 29, 1865, a military commission sitting in Washington City (as Washington, D.C., was then known) heard evidence against seven men and one woman. All were charged with conspiring to murder President Abraham Lincoln. All were found guilty. Four were sentenced to hang (and were executed on July 7) and three were sentenced to life imprisonment; only one defendant received a relatively light punishment—six years in jail.

But while there was sufficient evidence to find them guilty—and almost all historians today believe that the eight defendants were guilty of conspiring to harm the president, albeit to varying degrees—the legal significance of their trial by military commission was that the proceedings were unfair.

Trial by military commission—rather than in a civilian court—was assured after U.S. Attorney General James Speed issued a legal opinion stating that the conspirators not only could be, but must be, tried by a military commission. This is what Secretary of War Edwin Stanton and the Army’s judge advocate general, Brig. Gen. Joseph Holt, wanted because of the many advantages that a commission offered the prosecution.

First, and most importantly, there was no right to appeal the verdict of the military commission. President Andrew Johnson appointed the members of the commission and directed them to try the case. Johnson then approved the findings and the sentence.

Since the Supreme Court had ruled in 1864 in Ex parte Vallandigham that federal courts had no jurisdiction over military commissions (because they were not “courts”), there was no danger that the conspirators could escape justice by appealing to an Article III judge.

Second, a majority vote was all that was needed to convict the defendants (as opposed to a unanimous verdict in civilian court). Additionally, only two-thirds of the commission members had to vote yes for the death penalty to be imposed.

Third, there was no presumption of innocence and very relaxed rules of evidence. Generally, the prosecution was permitted to introduce any evidence that it determined was relevant and probative to the guilt of the eight conspirators—including hearsay testimony.

Fourth, Judge Advocate General Holt and his assistant prosecutor, John A. Bingham, participated in deliberations with the nine Union officers who sat as the fact-finders in the case. While these two prosecutors did not vote, they did argue for findings of guilty for all the defendants and suggested that hanging was the only proper sentence for all the conspirators. And since only one of the nine Union officers voting was a lawyer or had any legal training, what Holt and Bingham said during these deliberations almost certainly carried considerable weight. The defense counsel, of course, were excluded from participating in the commission’s deliberations.

Fifth, Holt (probably in concert with Stanton) personally selected the nine Union officers—seven generals and two colonels—who served as jurors. All were “shooting” officers who had seen combat and had little sympathy for the South or the Confederacy. As Lincoln had approved their commissions, they almost certainly felt a strong sense of loyalty to him and the Union.

A final important point: There was little doubt that the government could not achieve the results it wanted—a swift verdict of guilty and hanging for the defendants—if it tried them in civilian court. There were few Union men in Washington City; they were in the Army. The white men who would have heard the evidence against the conspirators would almost certainly have been Southerners and had Confederate sympathies. The possibility of jury nullification was too high to take the risk.

Today, the unfairness of the military commission proceedings continues to overshadow the question of guilt or innocence—demonstrating once again that the process is as important as the results in a criminal trial.

Print and early online versions of an article in the Civil War package, “The Conspirators: Tried by Military Commission,” April, mistakenly stated that none of the nine Union officers voting on the sentences for the seven people convicted of conspiring to assassinate President Abraham Lincoln had legal training. One of those officers, Lewis Wallace, was a lawyer in Indiana before the war and had served as a prosecutor.