War Powers Belong to the President 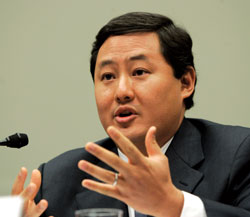 In ordering the U.S. Air Force to attack Libyan targets on the ground and impose a no-fly zone in the air, President Barack Obama sent the U.S. military into combat without Congress’ blessing. This was not always President Obama’s view. Anti-war Democrats vigorously challenged President George W. Bush’s conduct of the wars in Afghanistan and Iraq by claiming that he had violated Congress’ right to declare war. As a presidential candidate in 2007, Obama once agreed: “The president does not have power under the Constitution to unilaterally authorize a military attack in a situation that does not involve stopping an actual or imminent threat to the nation.”

Fast-forward four years. In announcing the intervention in Libya, Mr. Obama told Congress that he was acting “pursuant to my constitutional authority to conduct U.S. foreign relations and as commander in chief and chief executive.” As the Libyan war reached its 60th day at the end of May 2011, President Obama sent a letter to Congress that reported on progress but did not seek any authorization.

This time, President Obama has the Constitution about right. His exercise of war powers rests firmly in the tradition of American foreign policy. Throughout our history, neither presidents nor Congresses have acted under the belief that the Constitution requires a declaration of war before the U.S. can conduct military hostilities abroad. We have used force abroad more than 100 times but declared war in only five cases: the War of 1812, the Mexican-American and Spanish-American wars, and World War I and II.

Without any congressional approval, presidents have sent forces to battle Indians, Barbary pirates and Russian revolutionaries; to fight North Korean and Chinese communists in Korea; to engineer regime changes in South and Central America; and to prevent human rights disasters in the Balkans. Other conflicts, such as the 1991 Persian Gulf war, the 2001 invasion of Afghanistan and the 2003 Iraq war, received legislative “authorization” but not declarations of war. The practice of presidential initiative, followed by congressional acquiescence, has spanned both Democratic and Republican administrations and reaches back from President Obama to Presidents Abraham Lincoln, Thomas Jefferson and George Washington.

Common sense does not support replacing the way our Constitution has worked in wartime with a radically different system that mimics the peacetime balance of powers between president and Congress. If the issue were the environment or Social Security, Congress would enact policy first and the president would faithfully implement it second. But the Constitution does not duplicate this system in war. Instead, our framers decided that the president would play the leading role in matters of national security.

Those in the pro-Congress camp call upon the anti-monarchical origins of the American Revolution for support. If the framers rebelled against King George III’s dictatorial powers, surely they would not give the president much authority. It is true that the revolutionaries rejected the royal prerogative, and they created weak executives at the state level. Americans have long turned a skeptical eye toward the growth of federal powers. But this may mislead some to resist the fundamental difference in the Constitution’s treatment of domestic and foreign affairs. For when the framers wrote the Constitution in 1787 they rejected these failed experiments and restored an independent, unified chief executive with its own powers in national security and foreign affairs.

The most important of the president’s powers are commander in chief and chief executive. As Alexander Hamilton wrote in Federalist 74, “The direction of war implies the direction of the common strength, and the power of directing and employing the common strength forms a usual and essential part in the definition of the executive authority.” Presidents should conduct war, he wrote, because they could act with “decision, activity, secrecy and dispatch.” In perhaps his most famous words, Hamilton wrote: “Energy in the executive is a leading character in the definition of good government. … It is essential to the protection of the community against foreign attacks.”

The framers realized the obvious. Foreign affairs are unpredictable and involve the highest of stakes, making them unsuitable to regulation by pre-existing legislation. Instead, they can demand swift, decisive action—sometimes under pressured or even emergency circumstances—that is best carried out by a branch of government that does not suffer from multiple vetoes or is delayed by disagreements. Congress is too large and unwieldy to take the swift and decisive action required in wartime. Our framers replaced the Articles of Confederation, which had failed in the management of foreign relations because they had no single executive, with the Constitution’s single president for precisely this reason. Even when it has access to the same intelligence as the executive branch, Congress’ loose, decentralized structure would paralyze American policy while foreign threats grow.

Congress has no political incentive to mount and see through its own wartime policy. Members of Congress, who are interested in keeping their seats at the next election, do not want to take stands on controversial issues where the future is uncertain. They will avoid like the plague any vote that will anger large segments of the electorate. They prefer that the president take the political risks and be held accountable for failure.

Congress’ track record when it has opposed presidential leadership has not been a happy one. Perhaps the most telling example was the Senate’s rejection of the Treaty of Versailles at the end of World War I. Congress’ isolationist urge kept the United States out of Europe at a time when democracies fell and fascism grew in their place. Even as Europe and Asia plunged into war, Congress passed the Neutrality Acts designed to keep the United States out of the conflict. President Franklin Roosevelt violated those laws to help the Allies and draw the nation into war against the Axis. While pro-Congress critics worry about a president’s foreign adventurism, the real threat to our national security may come from inaction and isolationism.

Many point to the Vietnam War as an example of the faults of the “imperial presidency.” Vietnam, however, could not have continued without the consistent support of Congress in raising a large military and paying for hostilities. And Vietnam ushered in a period of congressional dominance that witnessed American setbacks in the Cold War and the passage of the ineffectual War Powers Resolution. Congress passed the resolution in 1973 over President Richard Nixon’s veto, and no president, Republican or Democrat, George W. Bush or Obama, has ever accepted the constitutionality of its 60-day limit on the use of troops abroad. No federal court has ever upheld the resolution. Even Congress has never enforced it.

Despite the record of practice and the Constitution’s institutional design, critics nevertheless argue for a radical remaking of the American way of war. They typically base their claim on Article I, Section 8, of the Constitution, which gives Congress the power to “declare war.” But these observers read the 18th century constitutional text through a modern lens by interpreting “declare war” to mean “start war.” When the Constitution was written, however, a declaration of war served diplomatic notice about a change in legal relations between nations. It had little to do with launching hostilities. In the century before the Constitution, for example, Great Britain—where the framers got the idea of the declare-war power—fought numerous major conflicts but declared war only once beforehand.

Our Constitution sets out specific procedures for passing laws, appointing officers and making treaties. There are none for waging war because the framers expected the president and Congress to struggle over war through the national political process. In fact, other parts of the Constitution, properly read, support this reading. Article I, Section 10, for example, declares that the states shall not “engage” in war “without the consent of Congress” unless “actually invaded, or in such imminent danger as will not admit of delay.” This provision creates exactly the limits desired by anti-war critics, complete with an exception for self-defense. If the framers had wanted to require congressional permission before the president could wage war, they simply could have repeated this provision and applied it to the executive.

Presidents, of course, do not have complete freedom to take the nation to war. Congress has ample powers to control presidential policy, if it wants to. Only Congress can raise the military, which gives it the power to block, delay or modify war plans. Before 1945, for example, the United States had such a small peacetime military that presidents who started a war would have to go hat in hand to Congress to build an army to fight it. Since World War II, it has been Congress that has authorized and funded our large standing military, one primarily designed to conduct offensive, not defensive, operations (as we learned all too tragically on 9/11) and to swiftly project power worldwide. If Congress wanted to discourage presidential initiative in war, it could build a smaller, less offensive-minded military.

Congress’ check on the presidency lies not just in the long-term raising of the military. It can also block any immediate armed conflict through the power of the purse. If Congress feels it has been misled in authorizing war, or it disagrees with the president’s decisions, all it need do is cut off funds, either all at once or gradually. It can reduce the size of the military, shrink or eliminate units, or freeze supplies. Using the power of the purse does not even require affirmative congressional action. Congress can just sit on its hands and refuse to pass a law funding the latest presidential adventure, and the war will end quickly. Even the Kosovo war, which lasted little more than two months and involved no ground troops, required special funding legislation.

The framers expected Congress’ power of the purse to serve as the primary check on presidential war. During the 1788 Virginia ratifying convention, Patrick Henry attacked the Constitution for failing to limit executive militarism. James Madison responded: “The sword is in the hands of the British king; the purse is in the hands of the Parliament. It is so in America, as far as any analogy can exist.” Congress ended America’s involvement in Vietnam by cutting off all funds for the war.

Our Constitution has succeeded because it favors swift presidential action in war, later checked by Congress’ funding power. If a president continues to wage war without congressional authorization, as in Libya, Kosovo or Korea, it is only because Congress has chosen not to exercise its easy check. We should not confuse a desire to escape political responsibility for a defect in the Constitution.

A radical change in the system for making war might appease critics of presidential power. But it could also seriously threaten American national security. In order to forestall another 9/11 attack, or to take advantage of a window of opportunity to strike terrorists or rogue nations, the executive branch needs flexibility. It is not hard to think of situations where congressional consent cannot be obtained in time to act. Time for congressional deliberation, which leads only to passivity and isolation and not smarter decisions, will come at the price of speed and secrecy.

The Constitution creates a presidency that can respond forcefully to prevent serious threats to our national security. Presidents can take the initiative and Congress can use its funding power to check them. Instead of demanding a legalistic process to begin war, the framers left war to politics. As we confront the new challenges of terrorism, rogue nations and WMD proliferation, now is not the time to introduce sweeping, untested changes in the way we make war.