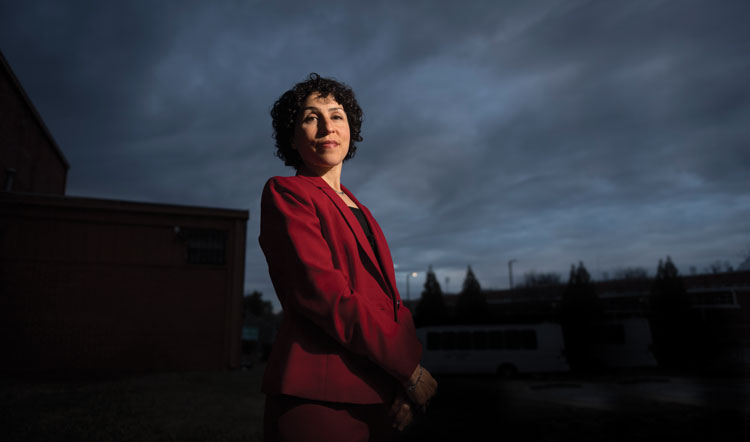 When she first entertained the idea of being a human rights attorney, Azadeh Shahshahani thought she would be doing that kind of work abroad. But she quickly came to realize that her legal expertise and advice was just as needed in the United States by immigrants like herself.

“The types of situations these folks are facing are human rights situations, and this is the type of work we have to be doing right here in the United States,” Shahshahani says.

She says she has found that her workload has increased exponentially since the start of the Trump administration in January 2017. “I have to say that I haven’t had a true moment of rest since the inauguration. Every day there’s something new,” she says. “Muslims and immigrants, and especially communities of color, are fearing for their lives in some instances. We are working on policies and procedures so people can feel safe.”

Shahshahani works as the legal and advocacy director at Project South in Atlanta, a leadership-development organization that mobilizes communities through education, partnerships and alliances, and organizing. It’s a continuation of the work she has done with immigrant communities throughout her legal career, including posts with the American Civil Liberties Union in North Carolina and Georgia, before she joined Project South in 2016.

Shahshahani knows all too well what it’s like to live amid danger, and also what it feels like to be an American immigrant. The daughter of a doctor, she was born just days after the start of the Iranian revolution in 1979 and lived through the Iran-Iraq war from 1980 to 1988. Her family left Iran when she was 15 and immigrated to Memphis, where she became a high school sophomore.

During her university years, Shahshahani thought she would want to follow in her father’s footsteps and become a doctor. She was even accepted into the University of Michigan medical school. But she changed her mind and enrolled in the law school instead. She was only one week into law school in September 2001 when the 9/11 terrorist attacks occurred. Witnessing Iranian friends being interrogated by the FBI and the special registration program enacted primarily for immigrants from majority-Muslim countries solidified her desire to become a human rights lawyer. 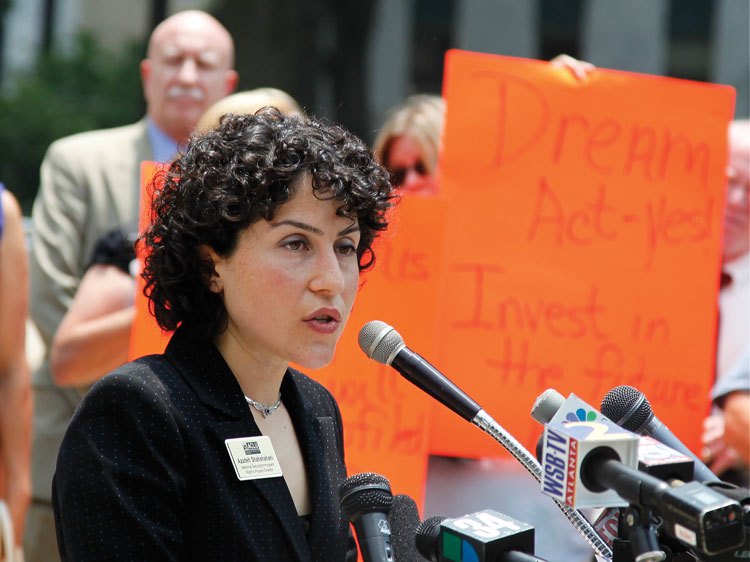 Azadeh Shahshahani: “The immigrant community is facing a human rights crisis. I’ve never seen this level of outrage—ever. It’s a moment that allows an opportunity to build a stronger social justice movement, and it gives us as lawyers an opportunity to use the law to do so.” Photograph by Michael A. Schwarz; AP Photo/John Bazemore

Every day is different as advocacy director at Project South. One recent week found her making a presentation to immigrants about their rights in Durham, North Carolina, then leading a seminar for lawyers about how to help immigrants in the Trump era the next day. And all the while she is monitoring legislative developments and continuing to highlight the conditions at immigration detention centers in Georgia.

Project South released a report written by Shahshahani last May arguing that the two largest immigration detention facilities in Georgia, the Stewart Detention Center and the Irwin County Detention Center, should be shut down because of the conditions, including prolonged detentions, inadequate health care and involuntary work programs. Immigrants at the private prisons have gone on hunger strikes to protest the conditions, which she describes as “horrendous.”

Shahshahani says that actions taken by the Trump administration have made it a difficult time to be a social justice activist in the United States—but also a positive time to do the work, since there are many people who are willing to be engaged. “You feel like you’re not isolated and there’s a lot of outrage out there,” Shahshahani says.

“As long as I’ve been out in the field, I’ve never seen this level of outrage—ever. It’s a moment that allows an opportunity to build a stronger social justice movement, and it gives us as lawyers an opportunity to use the law to do so.”

One notable human rights case Shahshahani litigated was her representation of Lisa Valentine. A Muslim woman, Valentine was jailed for 10 days in 2008 for contempt of court after refusing to remove her headscarf in a Douglasville, Georgia, courthouse. Shahshahani not only secured a settlement for Valentine from the city but also wrote the now-adopted binding policy of the Georgia Supreme Court that allows people to wear religious clothing of their choice while in courthouses.

“The reason the case has stuck with me is because it was really outrageous, what she had suffered. But we were able to address the situation in a systematic way,” she says. “The issue becomes a policy that we can talk about and create. This is a systematic way to make sure that it doesn’t happen to any individual.”

Although much of her work is in the United States, she has participated in human rights delegations to Haiti, Honduras, Palestine, Tunisia, Egypt and Venezuela. Shahshahani isn’t disappointed that her daily work doesn’t require her to use her passport, given the need for her services in her adopted homeland.

“This is what I want to do with my life,” Shahshahani says. “I’m happy. My work is very much needed, especially where I am, in the U.S. South. I’m in a privileged position to connect with people from around the world.”