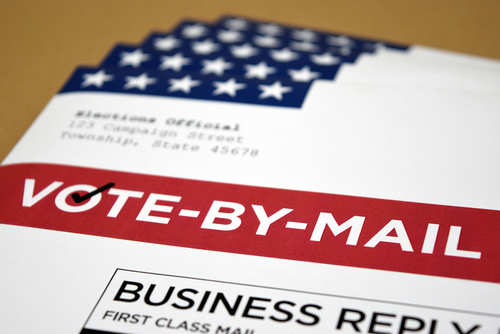 A lawsuit challenging late-arriving ballots in Pennsylvania suffered a defeat in a federal appeals court Friday, while a different Pennsylvania lawsuit was trimmed so much that it might no longer have the potential of affecting election results.

In the first suit, the 3rd U.S. Circuit Court of Appeals at Philadelphia ruled that the private citizen plaintiffs had no standing to challenge a three-day extension for counting ballots that had been imposed by the Pennsylvania Supreme Court on Sept. 17.

If anyone had standing, the appeals court said, it would be the Pennsylvania General Assembly, not the congressional candidate and four voters who filed the suit.

Even if there was standing, the appeals court said, it would not have blocked the counting of late-arriving ballots because it would interfere with the settled expectations of voters and election officials. The appeals court noted that the plaintiffs didn’t file suit until Oct. 22, three days after the U.S. Supreme Court refused to interfere with the deadline extension in a separate lawsuit.

The plaintiffs in the 3rd Circuit case had claimed that the three-day extension violated constitutional provisions giving legislatures the power to set the time, place and manner of elections; violated the federal statute setting the day of the election; and made mail-in voters a preferred class of voters in violation of the equal protection clause.

In a tweet, lawyer Neal Katyal, the former acting U.S. solicitor general during the Obama administration, called the 3rd Circuit ruling “a huge loss for Trump” and “a very big deal.” Katyal said the rationales—that the plaintiffs had no standing and filed the case too late—“are cross cutting across ALL litigation.”

The case is Bognet v. Secretary Commonwealth of Pennsylvania.

In the second suit, the Trump campaign filed an amended complaint Sunday that dropped constitutional due process, equal protection and elections clause claims stemming from an alleged lack of access by poll watchers.

The amended suit instead focuses on a claim that voters should not have been allowed to fix errors on mail-in ballots in Democratic counties. The suit cites a patchwork of differing responses to ballot errors. The suit seeks to block certification of Pennsylvania results and, in the alternative, to invalidate ballots in which voters were allowed to cure defects.

The claim over cured ballots would only affect a small number of votes and could not change the result, according to a lawyer representing Democrats.

The Washington Post and Politico covered the amended lawsuit.

Another difference in the amended suit is that one of the law firms representing the campaign, Porter Wright Morris & Arthur, has withdrawn from the litigation.

It’s at least the second time that Porter Wright has withdrawn from representing the campaign after the New York Times reported that some Porter Wright lawyers object to representation of the Trump campaign in the election litigation.

ABAJournal.com: “No new wave of election lawsuits emerged Tuesday; which pending cases could make a difference?”

ABAJournal.com: “Alito orders segregation of some Pennsylvania ballots; is it a ‘nothingburger’?”