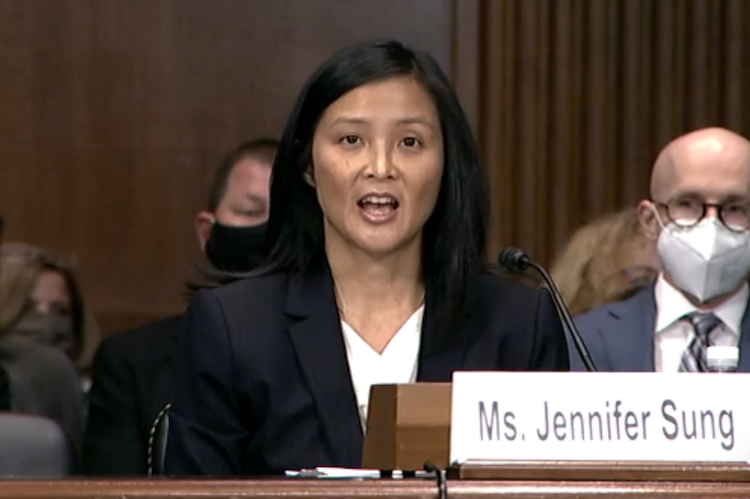 A nominee to the 9th U.S. Circuit Court of Appeals at San Francisco told members of the Senate Judiciary Committee on Tuesday that a letter that she signed calling then-Judge Brett M. Kavanaugh “intellectually and morally bankrupt” contained “overheated rhetoric.”

Nominee Jennifer Sung said she completely respected Kavanaugh’s authority as a justice, and she would follow U.S. Supreme Court precedents without reservation, report Law360, the National Law Journal, Fox News and Reuters. How Appealing links to additional coverage and a hearing video.

But Sung did not say whether she thought Kavanaugh was indeed “intellectually and morally bankrupt,” even as Republican U.S. Sen. Ted Cruz of Texas grilled her about the statement, according to Fox News.

Sung had signed the letter with Yale Law School students and alumni in 2018, while Kavanaugh was a Supreme Court nominee.

“I did not write the letter, but I recognize that much of its rhetoric was overheated. And if by signing that letter, I created the impression that I would prejudge any case or fail to respect the authority of any Supreme Court justice or any of the court’s precedents, then I sincerely apologize,” Sung said.

Sung is a neutral adjudicator for the Oregon Employment Relations Board and a former lawyer at two law firms.

President Joe Biden has so far nominated 13 people to federal appeals courts, including four who have already won confirmation. They are among a total of 11 judicial nominees confirmed by the Senate, Reuters reported Tuesday. The Senate confirmations are happening at a pace not seen since the Nixon administration, Reuters reported in a separate story Monday.

Just four of former President Donald Trump’s nominees had been approved at this point in his presidency.