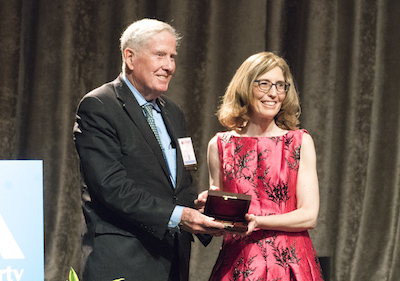 ABA President Linda Klein honors John Feerick, former dean of Fordham University School of Law, on Saturday at the ABA General Assembly and Presentation of the ABA Medal at the ABA Annual Meeting in New York City./Photos by Len Irish

ABA Medal winner John Feerick called on lawyers to help close the justice gap by volunteering to help those in need and by supporting the Legal Services Corp.

“Why not find a place to serve or create a program that can make a difference?” he asked. Feerick, the former dean at Fordham University School of Law, spoke Saturday in New York City at the ABA Annual Meeting’s General Assembly where he received the ABA Medal, the association’s highest honor.

ABA President Linda A. Klein introduced him. She said the world needs leaders with dignity, veracity and humility, and Feerick embodies those qualities. He is known for his compassion and dedication to others, and has been described as a great moral compass.

Feerick spoke about mentors and role models in his life who taught him about acting with integrity, aspiring to excellence and serving the community. They included his immigrant parents, his teachers, his law dean, his colleagues and former President John F. Kennedy.

He hoped to instill the same values in his 11 grandchildren by summarizing the lessons he has learned and wrote in a 14-page book he gave to each of them as a Christmas gift a few years ago.

He emphasized one passage in which he told his grandchildren to help strangers who come into their life, including people who are marginalized, disabled and elderly. The world is a community, he said, and each of us must do what we can to protect that community. More than we may realize, we can make small differences in the world, and we can lead in some way, he wrote to his grandchildren.

Feerick said he holds up the late Justice Thurgood Marshall and his work on behalf of civil rights as an example of the legal profession at its best. When the law was used as a tool of social oppression, Marshall demonstrated how the law could be used as a force for good, Feerick said.

Marshall provided a vision of a more humane America, and no calling is higher than to serve justice, Feerick said. 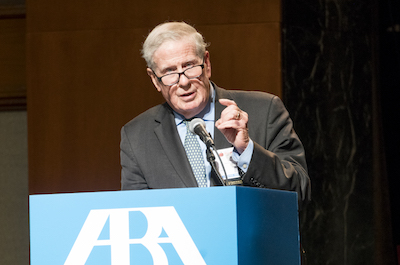 John Feerick, former dean of Fordham University School of Law, at the ABA General Assembly and Presentation of the ABA Medal on Saturday at the ABA Annual Meeting in New York City.

He referred to a report, released in June, that found 86 percent of civil legal problems reported by low-income Americans in the past year were not addressed with adequate or professional legal help.

The report also said low-income Americans will approach LSC-funded legal aid organizations for help with an estimated 1.7 million problems this year. But they will receive only limited or no legal assistance for more than half of these issues.

Although lawyers can help by volunteering, Feerick said it won’t be enough. “The challenge can’t be met solely through volunteering; it’s a society problem,” he said.

Besides being dean at Fordham for 20 years, Feerick served in the infantry and the JAG Corps in the U.S. Army and was a labor law partner at Skadden, Arps, Slate, Meagher & Flom. Currently, he is senior counsel at the Feerick Center for Social Justice at Fordham, which works with students and lawyers to connect low-income people to legal resources.

Feerick also has served on government commissions and bar association positions advocating public confidence in government and the legal system, judicial election reform, and solutions for homelessness. An ABA press release describes him as a “citizen lawyer.”