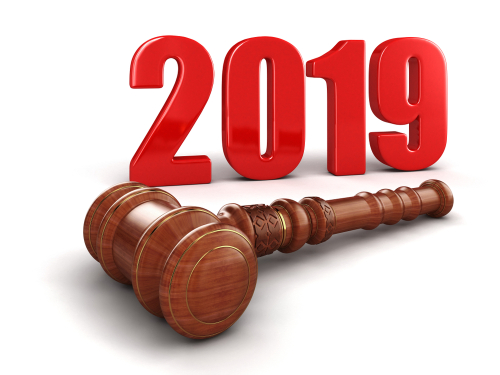 Law firm revenue grew 5.1% for the first nine months of 2019, largely because of billing rate growth of 4.7%, according to a third-quarter report by Citi Private Bank. And for the first time this year, revenue growth exceeded the growth in law firm expenses. “While we might not end the year with the strong growth levels seen in 2018,” the report says, “we anticipate that 2019 will be a decent year.” (Law.com)

A challenging work schedule, pressure from the transition to a new information system and, perhaps, a desire to be efficient led to the State Bar of California accidentally releasing in July bar exam topics to 16 law school deans, five days before the exam was given. The finding of human error was made by Nielsen Merksamer Parrinello Gross & Leoni, a law firm hired by the California Supreme Court to investigate the matter. According to the firm’s 19-page report, which is dated Nov. 12, there were also problems reaching decision-makers after the mistake came to the bar’s attention. (The Nov. 12 report)

An Iowa judge has ruled that a Cedar Rapids special education teacher was unfairly fired after a black doll was suspended from the ceiling in her classroom by a ribbon tied around its waist. A photo of the doll was posted on social media, leading to an outcry by those who saw the doll’s position as an allusion to lynching. The teacher, Tammy Ryan, said she perceived the doll as flying. The doll was placed in different positions throughout her classroom as part of a game. Judge Kevin McKeever said it would be unfair to penalize Ryan for “a single instance of insensitivity” after a career largely dedicated to repairing racial inequities. (The Gazette, the Des Moines Register)

Administrators at the newly named University of Pennsylvania Carey Law School are considering changing the shortened form of its name—“Carey Law”—after objections from alumni and students. The school was renamed because of a record $125 million donation from the W.P. Carey Foundation. Objectors signed a petition voicing fears that the new shortened name doesn’t carry the same prestige as “Penn Law.” The Daily Pennsylvanian said students were told at a lunchtime session that administrators were considering changing the shortened name back to “Penn Law.” But a law school spokesperson told Law.com that “Penn Law” is not on the table, although the school is “considering various options to ensure Penn remains a prominent and integral part of our shorter form names.” (The Daily Pennsylvanian, Law.com)