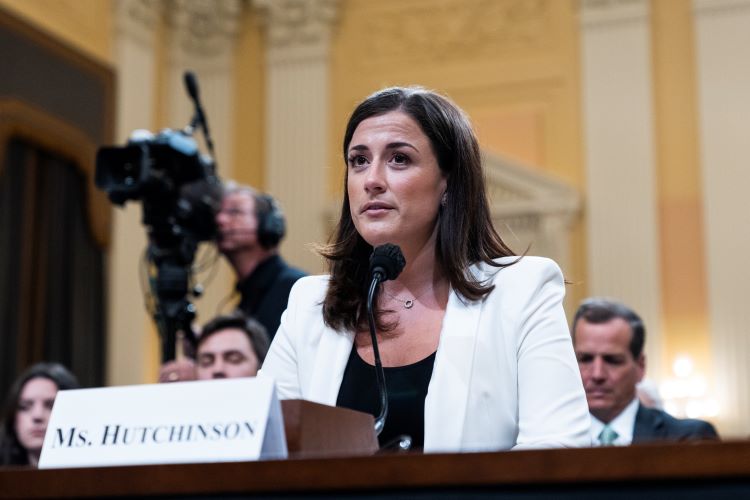 Cassidy Hutchinson, an aide to former White House chief of staff Mark Meadows, testifies Tuesday during a hearing of the House select committee investigating the Jan. 6, 2021, attack on the U.S. Capitol. Photo by Tom Williams/CQ Roll Call via the Associated Press.

But experts who spoke with the New York Times, the Washington Post and NPR said Hutchinson’s testimony could help in any federal criminal investigation or prosecution of former President Donald Trump. One of those experts is William Barr, a former attorney general in the Trump administration.

“The department is clearly looking into all this, and this hearing definitely gave investigators a lot to chew on,” Barr told the New York Times.

When Barr said there was no widespread election fraud, Trump became so angry that he hurled his porcelain plate at the wall, Hutchinson had testified, relaying information that she had been told.

More explosive, however, was Hutchinson’s testimony that Trump had been told that some of his supporters in the crowd on Jan. 6, 2021, had weapons, including guns, knives and spears, according to prior coverage by the New York Times. Hutchinson said Trump wanted a large crowd attending his rally, and he told his staff to “take the f- - -ing mags away,” a reference to magnetometers used to screen for metal objects, according to USA Today. The crowd would not hurt him, Trump said.

Despite his knowledge, Trump told the crowd to “fight like hell.” Hutchinson also testified that Trump was so focused on wanting to accompany his supporters to the U.S. Capitol that he lunged at the steering wheel while riding in the presidential limousine. That testimony was also based on information relayed to her.

Hutchinson also told of a conversation between her boss—Meadows—and then-White House counsel Pat Cipollone, who wanted Trump to call for an end to the rioting as the crowd called for the hanging of then-Vice President Mike Pence.

Meadows said Trump “thinks Mike deserves it” and didn’t think that the crowd was doing anything wrong, according to Hutchinson. 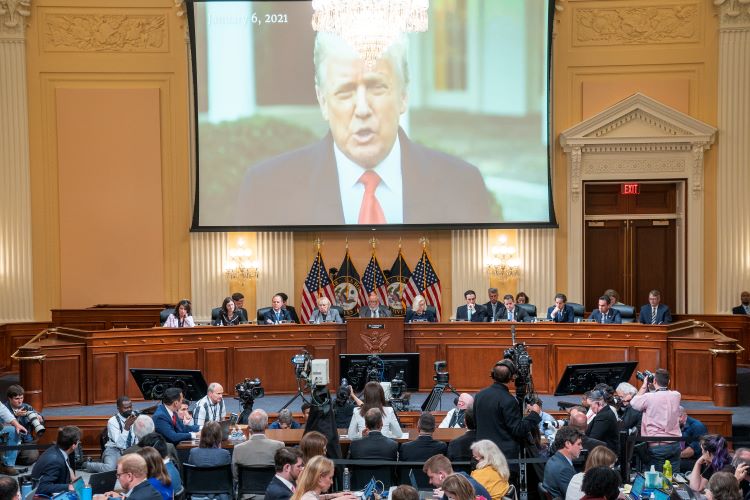 A video of former President Donald Trump from his Jan. 6, 2021, Rose Garden statement is played as Cassidy Hutchinson testifies during a hearing Tuesday. Photo by Sean Thew via the Associated Press.

“To me,” he said, “the testimony about let’s take the mags down is the most important piece of testimony yesterday and, I think, put on top of all the other evidence we’ve seen, does make a prosecutable case against Donald Trump. …

“He knew, right before he took that stage, that that crowd was armed. He knew they were headed to the Capitol. And he was so confident that they were not going to do anything to him, they were there for him, that he was willing to risk his own security by telling people that he wanted those mags taken down. So to me, that could lend itself to a conspiracy charge, to an obstruction charge, even to a seditious conspiracy charge, which requires a showing that force was part of the plan,” Honig said.

Hutchinson’s testimony could make it easier to show that Trump had the corrupt intent needed for a charge of obstructing an official proceeding—the certification of the vote, according to the New York Times and a Politico column by Renato Mariotti, a former federal prosecutor.

Before Hutchinson’s testimony, it appeared as Trump had refused to act by refusing to at first call for an end to the violence or by failing to call for backup help for police, Mariotti wrote in his column. But episodes such as the alleged steering-wheel grab show that Trump wanted to be at the Capitol, “hands-on, for the attack itself,” Mariotti said.

The testimony could also support a prosecution for inciting violence, which requires the person who is inciting others to know that the crowd would engage in “imminent unlawful action,” according to Mariotti.

“Before Hutchinson’s testimony, an incitement prosecution would likely fail to clear the high First Amendment hurdle,” Mariotti wrote. “Now, it is at least a close call and something DOJ should seriously consider.”