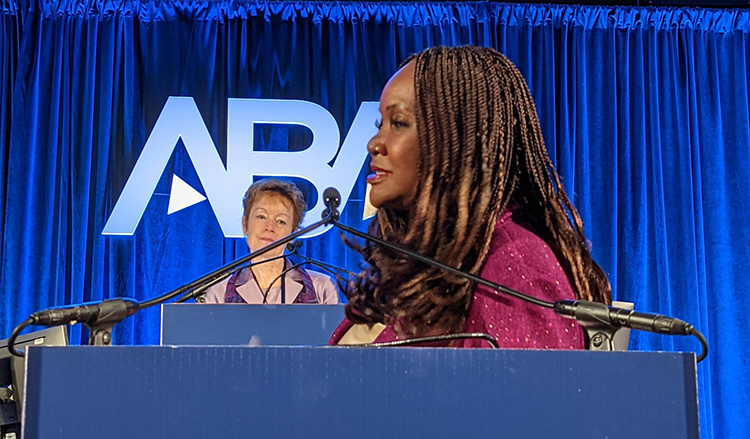 Deborah Enix-Ross, who previously served as chair of the House of Delegates, addresses the body as ABA president-elect. Barbara Howard, current chair, looks on in the background. Photos from the American Bar Association.

Much has changed since the ABA's February 2021 midyear meeting, but Deborah Enix-Ross, the new president-elect, says the call to action she made then—seeking civics, civility and collaboration in the profession—is more important than ever.

“We face a country divided over many issues, including voting rights, how to address racial inequality and policing communities of color, and attacks on the justice system and the rule of law,” Enix-Ross said in her Tuesday speech to the House of Delegates after they voted to approve her nomination.

She added that to have progress, lawyers must lead the way.

“With every action we take, we are the ones who can restore confidence in the judicial system, fight for the independence of the judiciary and protect the rule of law. We have to do it, we don’t have a choice,” said Enix-Ross, who also spoke about a general lack of knowledge around civics, as well as beliefs that the justice system is unfair toward people of color.

A senior adviser to the International Dispute Resolution Group at Debevoise & Plimpton, Enix-Ross has chaired the International Law Section, where she also helped recruit women and minorities as the Goal IX Officer, and co-founded the Women’s Interest Network. She also chaired the Section Officers Conference, the Center for Human Rights and the House of Delegates. She served as chair of the House from 2016 to 2018. 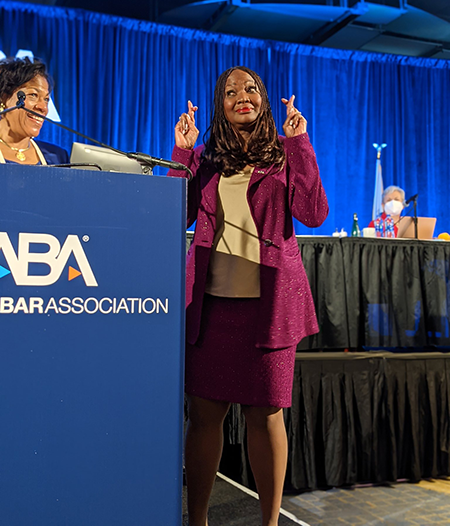 Deborah Enix-Ross crosses her fingers jokingly as the House of Delegates votes to confirm her nomination.

For solutions going forward, the New York lawyer mentioned policy tools to lobby for laws that create a more just and inclusive society; the association’s membership strength; and the ABA goals, which are serving members, improving the profession, eliminating bias, and protecting and advancing the rule of law both inside and outside the United States.

“We will continue this leadership, not just because these are our four goals, but because they form the basis of our core values. They are essential to our role as lawyers and they give life and purpose to our beloved association,” said Enix-Ross, who attended her first ABA meeting almost 40 years ago, using law school graduation money to cover airfare, hotel and registration fees for the event.

“Why? Because I wanted to be around the best, smartest leaders in the legal profession, and I thought they could only be found in the ABA,” she said.

In her speech, Enix-Ross thanked Patricia Lee Refo, who ended her term as ABA president at the close of the annual meeting; Barbara Howard, the House of Delegates chair; ABA President Reginald Turner; and past president Judy Perry Martinez, as well as ABA Executive Director Jack Rives, ABA staff and Debevoise & Plimpton.

Additionally, Enix-Ross noted that the ABA showed an “outpouring of support” following the death of her son, Parker Enix-Ross, who died in June at 28 from complications related to lupus.

“Please know that every visit, expression of condolences, comfort and support has been received and appreciated,” she said.