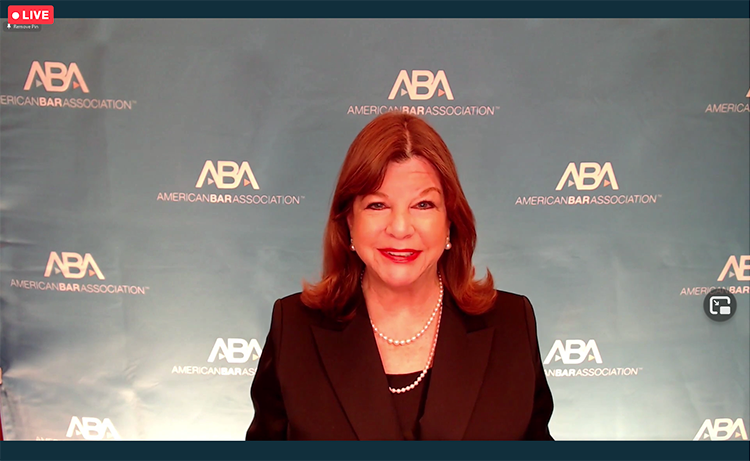 ABA President Patricia Lee Refo addressed the House of Delegates remotely during their session at the midyear meeting.

Since taking office, ABA President Patricia Lee Refo has maintained a schedule of events that would've once been unimaginable.

She told the House of Delegates at the 2021 ABA Midyear Meeting on Monday that in 2½ consecutive days last fall, she spoke at virtual events hosted by the Harvard Law School in Cambridge, Massachusetts, and the Union Internationale des Avocats in Paris. She also, from her kitchen, attended the annual state bar conventions in both Connecticut and Wyoming.

“Now picture me on airplanes even trying to go to and from each of these events and you can appreciate the upside to our new world,” Refo said. “Your ABA president has spoken in front of nearly 30,000 people in the last six months, without leaving her home, and that’s not counting podcasts, TV and radio, and on-demand viewing.”

Refo called House members’ attention to one specific event, the ceremonial opening of the legal year in London where she represented the ABA during an evensong service. That ceremony also featured remarks by Robert Buckland, the United Kingdom’s lord chancellor and secretary of state for justice, who challenged lawyers to learn from the upheaval brought on by the COVID-19 pandemic and build a stronger justice system in the future.

“This is the charge we must adopt for ourselves in this moment—that we will emerge from the pandemic building a justice system in America that is even more just, that provides more access to more people in better ways and that moves us ever closer to the promise of equal justice under law,” she said.

Refo said the ABA is already on a “promising path forward,” and she provided the House with an overview of its work so far.

The Task Force on Legal Needs Arising out of the 2020 Pandemic has drawn attention to the eviction crisis and lobbied Congress for the need for rent relief for both tenants and landlords. The ABA asked state bar associations to encourage their members to provide pro bono legal services, while Free Legal Answers expanded to assist with veterans’ issues and immigration questions.

Additionally, the Center for Innovation continues to work with legal scholars and regulatory authorities to determine whether and how innovations can help bridge the gap in access to justice.

The Coordinating Group on Practice Forward is collecting and distributing resources from inside and outside of the ABA to help lawyers with their practices during and after the pandemic. The group recently conducted a survey of members to better understand how they have been impacted by COVID-19 and put forward two resolutions related to improving lawyer well-being and access to child care.

These measures, 300A and 300B, were overwhelmingly approved by the House Monday.

Refo pointed out that ABA members are also “sustaining the urgency of our work toward real racial equity in our country and in the legal profession.”

The association’s sections, divisions and forums, with the support of the Center for Racial and Ethnic Diversity, have made racial equity a priority. The ABA Commission on Racial and Ethnic Diversity in the Profession released the 2020 ABA Model Diversity Survey Report on diversity, equity and inclusion in law firms, and the Commission on Women in the Profession organized the World Forum for Women in the Law to inform the next generation of female legal leaders.

“As stewards of our justice system, all lawyers need to stand up, take responsibility and do our part to ensure that our own profession is diverse and inclusive,” Refo said. “We need to forge new paths to ensure that our laws and policies do not explicitly or implicitly harm or exclude any person on account of race, ethnicity, gender and gender identity, sexual orientation, so-called disability or other factors that create injustice.”

Refo spoke of the Jan. 6 attack on the U.S. Capitol. In the weeks that followed, she addressed the international legal community at the ceremonial opening of the legal year in Hong Kong and a conference of bar presidents in Austria, she told the House.

She emphasized to her international audiences that the rule of law produced a fair and accurate presidential election in the United States, enabled claims of impropriety to be fully investigated and allowed dozens of lawsuits challenging results to be carefully considered by the courts.

“And the rule of law led our Congress that very day to return to session and certify the electoral college results,” Refo said. “The international bar leaders have uniformly expressed their support and their solidarity with us.

“We should be heartened that the American justice system remains a shining example to the world.”

Also on Monday, Deborah Enix-Ross accepted the nomination to serve as president-elect nominee of the ABA. In addressing the House, she reminded members that when she announced her intention to seek office in February 2020, she outlined a call to action in three areas: civics, civility and collaboration.

“As lawyers, we are the ones that can lead the way in these areas and bring required progress,” she said. “We are the ones who can restore confidence in the judicial system, fight for the independence of the judiciary and protect the rule of law.”