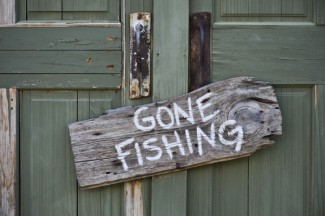 A county magistrate in West Virginia has been suspended for 90 days for a “flagrant attempt to intimidate” officers issuing a citation for exceeding the limit on trout fishing.

The West Virginia Supreme Court of Appeals sanctioned Magistrate David Ferguson of Wayne County, West Virginia, without pay and imposed a $2,000 fine for his “belligerent and coercive behavior” during the incident.

Law360 and the Huntington Herald-Dispatch have coverage, while the Legal Profession Blog has highlights from the April 22 opinion.

The incident occurred in February 2017, less than four months after Ferguson became a magistrate, according to the evidence presented to the West Virginia Judicial Hearing Board. Ferguson was trout fishing with his father, a retired magistrate, soon after the lake had been stocked with trout. The daily limit was six trout per person.

An undercover officer with the Department of Natural Resources observed Ferguson catch eight fish. He gave one of the fish to his father and one to a third man. Another officer alerted to the situation also saw Ferguson catch extra fish.

One of the officers stopped Ferguson to issue a citation as he was leaving with six fish on a stick. The officer displayed his badge, saying he did so to show that he was “not lying about who I am.” The officer then asked for Ferguson’s ID, fishing license and trout stamp.

The officer said Ferguson threw a card down on his tailgate in an “arrogant manner” and said, “Well, I’m not lying about who I am, either.” The card was a West Virginia Supreme Court photo identification card. The officer interpreted the gesture as a message that Ferguson was someone above the law, whether a lawyer, judge or magistrate.

Another officer approached and saw three creels each holding six fish in the back of Ferguson’s truck. The officer walked away to get his paperwork, and when he returned, the third man had left and there were only two creels with five fish each. When the officer asked Ferguson where his friend went, Ferguson allegedly replied, “What friend?”

After that, things began to get out of hand, the officer testified. Ferguson raised his voice and demanded that he prove any violation of the trout limit, according to the officer.

“You go ahead and do what you’re gonna do,” Ferguson allegedly said. “This ain’t going nowhere.”

When the officer walked to a picnic table to write the citations, he saw Ferguson begin to approach with his hands in his pockets. The officer told Ferguson to remove his hands from his pockets because he didn’t want to get shot, which appeared to enrage Ferguson, the officer said.

The situation escalated, according to the officer’s testimony. Ferguson and his father were “pacing back and forth, side to side, screaming at the top of the lungs,” the officer said.

The officer was able to issue the citations after the men calmed down. As Ferguson received his citation, he named two of the officers’ supervisors and indicated that he would contact them. He did not follow through with that threat. Ferguson later pleaded no contest to exceeding the creel limit.

Ferguson admitted catching seven trout and giving one to his father. He denied catching any additional fish. He said he mistakenly took out the West Virginia Supreme Court photo from his pocket, and there was no attempt to intimidate the officer.

Ferguson also said he wouldn’t deny that he raised his voice “a little bit,” but he was never out of hand. Ferguson maintained that it was the officer who was disrespectful.

Ferguson also testified that he did not know the third man by name, and he was not fishing with him.

“This case is about much more than catching extra fish,” the court said. “Certainly, we want judicial officers to obey all laws, including state fishing regulations. However, if the respondent had behaved in a professional manner when receiving the fishing citation, this matter never would have resulted in a formal disciplinary proceeding. Instead, the respondent acted in a completely inappropriate, belligerent and coercive manner. … Finally, he lied to the [Office of Judicial Disciplinary Counsel] during his sworn statement when he denied acting in this disrespectful and coercive manner.”

In mitigation, the court said Ferguson had only been a magistrate for a few months when the incident occurred, and he had not received any prior judicial discipline.

The court rejected three other mitigating factors cited by the hearing board.

The first was that Ferguson’s father was even more confrontational and may have influenced Ferguson’s behavior. The second was that Ferguson and his father had made prior rulings in cases brought by the Department of Natural Resources with which the officers did not agree. The third was that Ferguson did not consult with a lawyer before drafting a response to the ethics complaint.

“The fact that the respondent’s father may have been acting in an even more belligerent manner does not excuse the respondent, a sitting magistrate, from complying with the judicial canons,” the court said. “Moreover, with or without counsel, a magistrate should certainly know to be truthful when testifying under oath.”

In addition, neither officer who confronted Ferguson was involved in the other cases.

“Most importantly, there is nothing about those other cases that would justify the respondent’s belligerent and coercive treatment of the officers when they were issuing this citation,” the court said.

Ferguson’s lawyer did not immediately respond to a message left on a contact form through his law firm website.