Couple's divorce terms are vacated because of judge's ghostwritten opinion 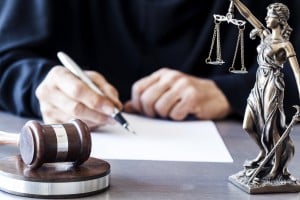 A district judge in Iowa has vacated a couple’s divorce decree because it was ghostwritten by a lawyer without the knowledge of opposing counsel.

District Judge Jeffrey Neary said Thursday that the marriage of Troy and Audra Presuhn is still dissolved but other aspects of their divorce are vacated, the Sioux City Journal reports.

The case represents the first time that an Iowa court has nullified a decision by former Judge Edward Jacobson of Plymouth County because of his ghostwritten opinions, according to the Des Moines Register.

A review of Jacobson’s decisions released in June had found he failed to notify opposing parties in at least 13 cases that he was using proposed rulings written by lawyers. Most of the rulings were in family law cases. Jacobson retired last fall.

In the Presuhn case, Jacobson had called a lawyer for Audra Presuhn in June 2016 and asked her to write a final decree that mostly favored her client. He filed the document as a final decision after correcting one typographical error.

A lawyer for Troy Presuhn had figured something was amiss when, during a hearing to clarify aspects of the divorce decree, Jacobson had complained, “I didn’t write this thing.”

Jacobson said in a deposition that he believed it was common practice to accept ghostwritten rulings in his district. But the June report said other judges in the district who asked for ghostwritten orders had notified all parties.