Does Trump have to testify to Jan. 6 committee? It’s a 'constitutional gray area' 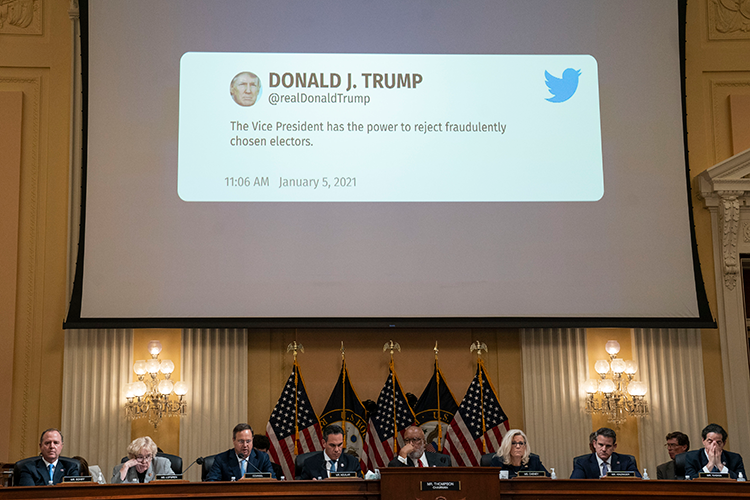 Former President Donald Trump could cite one U.S. Supreme Court decision to bolster his argument that he can’t be compelled to testify before the congressional committee investigating the Jan. 6, 2021, U.S. Capitol riot.

But the decision, Nixon v. Fitzgerald, is not directly on point, the New York Times reports. The 1982 decision held that former presidents are immune from being sued for damages over official decisions that they made while in office.

Mark J. Rozell, a professor at George Mason University, told the New York Times that there is no clear precedent that would resolve any dispute that arises over the committee’s subpoena for Trump.

“We are in a constitutional gray area here where there is no clear guidance as to exactly what should happen,” Rozell told the New York Times.

But Trump’s lawyers could make “various creative legal arguments” that could delay resolution until January, when the U.S. House of Representatives will include the winners of the 2022 midterm elections for the next Congress.

Republicans are likely to gain a majority, according to the polls, and they are “virtually certain to shut down the Jan. 6 committee,” the New York Times reports.

The New York Times summarizes other arguments that could be made by Trump. They include:

• Trump is protected by executive privilege. Trump could cite a 1974 decision by the U.S. Court of Appeals for the District of Columbia Circuit. It held that then-President Richard Nixon couldn’t be forced to turn over his Oval Office tapes to the Senate committee investigating the Watergate break-in. The committee could point out however, that the decision applies to a sitting president—not an ex-president. The Supreme Court’s later decision requiring Nixon to turn over the tapes applied to a criminal proceeding.

• The Jan. 6 committee was improperly constituted because the House resolution authorizing its creation envisioned the panel would have 13 members, including five appointed with input from Republican leadership. The committee has nine members. The only two Republicans, Rep. Liz Cheney of Wyoming and Rep. Adam Kinzinger of Illinois, didn’t get the endorsement of House Minority Leader Kevin McCarthy of California because he boycotted the process after House Speaker Nancy Pelosi of California rejected several of his choices.

• The subpoenas are invalid because they weren’t intended to help Congress in its role of drafting laws. Two federal judges upheld the subpoenas in cases advancing this argument. The cases involved the Republican National Committee and Steve Bannon, a former adviser for Trump. A federal appeals court later vacated the RNC ruling after the committee dropped that subpoena.

The New York Times notes that a subpoena challenge could take several routes. Trump could file a lawsuit seeking to quash the subpoena, the committee could sue Trump, or the House could refer the subpoena matter to the U.S. Department of Justice for possible prosecution.

ABAJournal.com: “Wife of Justice Thomas will give interview to Jan. 6 committee, her lawyer says”

ABAJournal.com: “Jan. 6 committee’s subpoena of Trump is ‘on a tight time frame’”