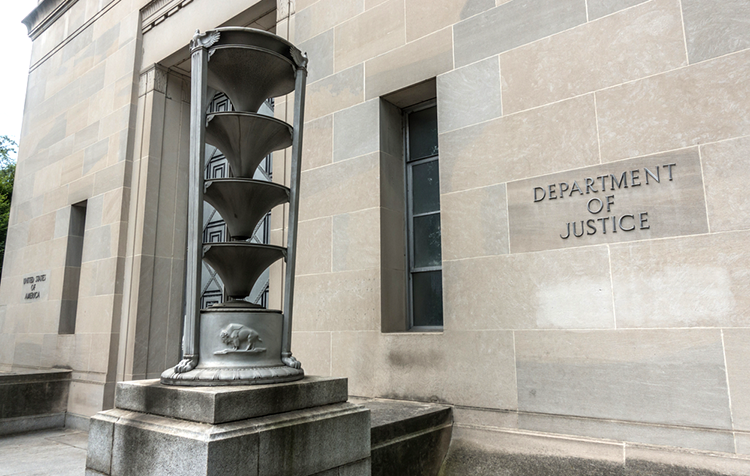 The U.S. Department of Justice building in Washington, D.C. Image from Shutterstock.com.

A top Department of Justice lawyer is notifying courts that he inadvertently let his Washington, D.C., law license lapse around Oct. 1, a mistake he didn’t discover and correct until Dec. 9.

Clark’s letters to three courts—including the 9th U.S. Circuit Court of Appeals at San Francisco—gave the same explanation for the lapsed license. Law.com covered the letter to a federal court in Washington, D.C.

“The DC Bar did not have my correct address and I received no mail forwarded to me from my prior private law firm (which I left on October 31, 2018 to join the Justice Department the following day),” Clark wrote in the D.C. letter, dated Jan. 27. “That firm had handled paying my bar dues from 2006-2018; the firm also moved to a different address circa March 2019. I also reported the dues issue to Justice Department authorities.”

During the two-month period, Clark’s name appeared on federal case filings in the two lower courts, and he gave oral arguments before the 9th Circuit.

The 9th Circuit case seeks to enforce a subpoena for ExxonMobil Corp.’s records relating to a California refinery fire. The 9th Circuit ruled for the federal government last month, according to Law360.

In the D.C. case, the administration is defending its “preemption regulation” that sets a nationwide emission standard for cars and light-duty trucks. A suit filed by more than 20 states said the regulation would undercut state regulations that impose stricter standards.

In the New York case, the administration is seeking to enforce environmental regulations against a horse farmer.

Next:
2 founding partners leave boutique firm, and one explains why: He needs a break from law practice