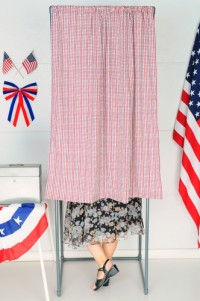 An Indiana law making it a felony offense to take a “ballot selfie” at polling places or share it on social media is unconstitutional, a federal judge ruled Monday.

It “embodies a content-based restriction on speech that cannot survive strict scrutiny because it neither serves compelling state interests nor is narrowly tailored to achieve those interests,” she wrote, pointing out that law prohibits taking photos of unmarked ballots as well as voters who might want to take ballot selfies “for entirely legitimate and innocuous reasons.”

The state had argued that the law permitted a “voting selfie,” so long as the actual ballot wasn’t included in the photo, and was needed to deter vote-selling, with the voter potentially using the ballot selfie to prove how the vote was cast. Similarly, individuals could also be pressured by an organization or peers to vote a certain way, with the ballot selfie used as proof of compliance.

But Barker said the law was too broad: “When content-based restrictions target vast amounts of protected political speech in an effort to address a tiny subset of problematic speech, the restriction simply cannot stand if other less restrictive alternatives exist,” she wrote.

There are already laws against buying votes, said Ken Falk, the ACLU of Indiana legal director. He suggested that the state could simply have banned cellphones in voting booths rather than focusing on the content of photos, reports the Journal Gazette.

Deputy Indiana Attorney General Dennis Mullen argued the case for the state. He did not immediately respond to a request for comment, the Associated Press reports.

An ACLU news release provides more details about the case.