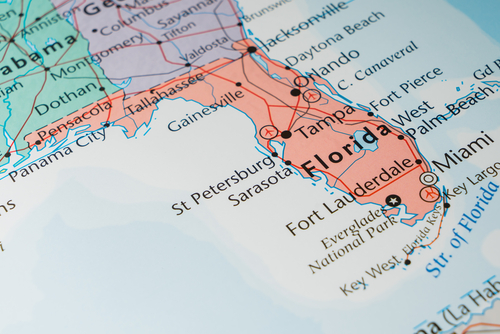 A lawyer in Fort Lauderdale, Florida, has been temporarily barred from practicing law as a result of an emergency suspension imposed after she was accused of driving her car into four people on the sidewalk and trying to run down a witness.

The Florida Supreme Court imposed the suspension for Beatrice Bijoux on March 21, according to discipline summaries released by the Florida Bar on April 1.

The Legal Profession Blog noted the case, while the Miami Herald, WPBF and CBS 12 have additional coverage.

One of the four people was hospitalized, according to the media reports.

Bijoux, 31, was charged March 10 with four counts of attempted murder, one count of aggravated assault with a deadly weapon and one count of high speed or wanton fleeing, according to the Florida Bar. She pleaded not guilty to all charges.

The incident happened outside the Fresh Market in Stuart, Florida. Bijoux is accused of driving her Kia vehicle into the four people on the sidewalk at a speed of about 30 to 35 miles per hour. She then reversed her car at a high rate of speed, police say. She allegedly tried to hit another person, but he was able to get out of the way.

A witness followed Bijoux, who drove to the Stuart Police Department. She allegedly told an officer that voices in her head had told her to kill people. She allegedly said she wanted to kill the people, as well as herself.

Bijoux also said she thought about killing her 4-year-old niece who lives with her part time, police allege.

Bijoux’s lawyer said in a court appearance his client has mental health issues. A judge ordered her held without bond.

Marie Espady, Bijoux’s mother, told CBS 12 that her daughter thinks someone is following her, and she has mental health problems.

“She doesn’t know what she’s doing. She got up, and she didn’t take her medication this morning,” Espady said.

Bijoux is a 2016 graduate of Nova Southeastern University’s Shepard Broad College of Law, according to her profile by the Florida Bar. The website for the Bijoux Law Firm touts its success handling personal injury and accident cases.

Story corrected April 7 at 12:10 p.m. to report that Bijoux pleaded not guilty.