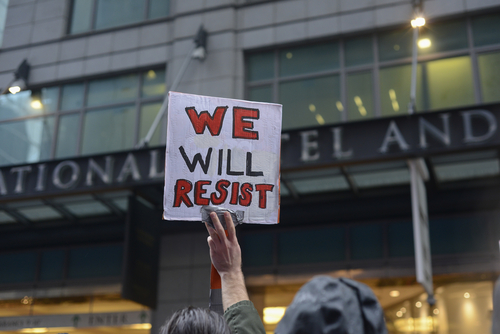 Updated: New guidance on prohibited political activity by federal employees warns that workplace talk of impeachment and resistance could be banned by the Hatch Act.

The guidance was issued on Tuesday by the Office of Special Counsel, which enforces the Hatch Act and is a different agency than special counsel Robert Mueller’s office, report the Washington Post and the New York Times.

The Hatch Act prevents federal employees from engaging in political activity at work.

The guidance says impeachment talk and resistance references are improper at work when they are directed at an office holder who is running for re-election—and President Donald Trump is running for a second term.

“Advocating for a candidate to be impeached, and thus potentially disqualified from holding federal office, is clearly directed at the failure of that candidate’s campaign for federal office,” says the guidance, entitled “Guidance regarding political activity.”

Similarly, the word resistance and its hashtag references have “become inextricably linked with the electoral success (or failure) of the president,” the guidance says. “Now that President Trump is a candidate for re-election, we must presume the use or display of ‘resistance,’ ‘#resist,’ ‘#resistTrump’ and similar statements is political activity unless the facts and circumstances indicate otherwise.”

The Office of Special Counsel offered a clarification on Friday that said general discussion of impeachment and some uses of the word resist are acceptable, the New York Times reported in a second story.

Employees can’t display posters calling for Trump’s impeachment or bumper stickers saying Trump should not be impeached, the new guidance says. But some discussion is allowed.

“Merely discussing impeachment, without advocating for or against its use against such a candidate, is not political activity,” the revised guidance said. “For example, two employees may discuss whether reported conduct by the president warrants impeachment and express an opinion about whether the president should be impeached without engaging in political activity.”

The new guidance also said employees could use the “resist” slogan if it related to an issue rather than a candidate. Some permitted uses would include #ResistHate and #ResistKavanaugh.

The new guidance was issued on the same day that the Office of Special Counsel released findings that six employees in the executive office of the president violated the Hatch Act for political posts on their official Twitter accounts, including posts using the “MAGA” hashtag, a reference to Trump’s slogan “Make America Great Again.”

The guidance had spurred some First Amendment concerns. Among those raising objections to the initial guidance was the ethics nonprofit American Oversight, which sent a letter asking for the guidance to be withdrawn. The letter was sent before the revisions on Friday.

Employees should be able to express their views that officials violated their oath to uphold the Constitution, the group’s executive director, Austin Evers, wrote in the letter. “Certainly, there is a difference between advocating that an official should (or should not) be elected and advocating that an official did (or did not) commit treason or high crimes and misdemeanors under the Constitution,” the letter said.

The group argued that the guidance could constrain whistleblowers who fear Hatch Act liability for reporting impeachable offenses.

In addition, the letter said, the First Amendment protects the right to object to administration action or policies. “Conflating resistance terminology with electoral advocacy opens the door to public employees being retaliated against for their policy positions or opinions,” the letter said.

After the revisions on Friday, Evers said in a statement that the rules remain unclear and the guidance should still be withdrawn.

Updated on Dec. 3 to report on clarified guidance issued on Friday.