'We must not be an insular profession,' says incoming ABA President Judy Perry Martinez 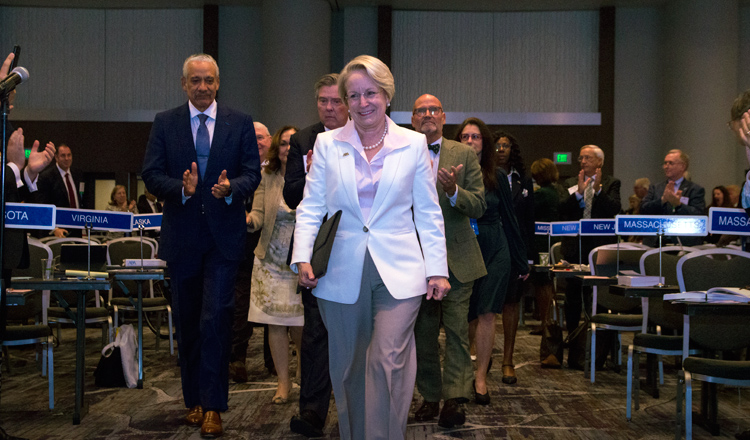 Incoming ABA President Judy Perry Martinez is welcomed onto the floor of the House of Delegates. Photos by Mitch Higgins.

In her first speech after the gavel-passing ceremony, incoming ABA President Judy Perry Martinez shared a story with the ABA House of Delegates about speaking on behalf of the New Orleans Bar Association at a naturalization ceremony.

That November day was meaningful, Martinez said, because her husband, Rene, is a naturalized citizen. He came to the United States from Algeria with his parents when he was only 2 years old.

“The reverence with which Rene and my in-laws have spoken about the blessing and privileges of U.S. citizenship awakened me to my own obligation not to take for granted the rights and responsibilities I had done nothing to achieve but must do everything to fulfill,” she said.

The ABA is fiercely committed to due process for asylum-seekers and other immigrants at the southern border, Martinez said. She plans to visit the South Texas Pro Bono Asylum Representation Project in the next few weeks.

Martinez, who will begin her term as president of the ABA at the close of the annual meeting, contended that “lawyers want to be the best at their profession they can be, and they expect support from the world’s premier association of lawyers.” While newly appointed state membership chairs will work to actively recruit and retain lawyers, she said she will continue to visit law schools to “foster a deep sense of belonging” among law students and faculty in the ABA.

She told the House of Delegates that a deep belief in the rule of law is a foundation of good lawyering. She said the ABA stands for the rule of law as it joins other national organizations this year in celebrating the 100th anniversary of the 19th Amendment, which guaranteed women the right to vote.

The historic milestone offers opportunities for ABA members to engage in civics education and encourage voting in elections at all levels, she said.

Additionally, Martinez said the ABA plans to launch a social media campaign this fall on the rule of law in United States democracy. The campaign will use the communication power of groups throughout the ABA to reach people who have not yet been reached.

She called on each member of the House of Delegates to stand up for civility and to speak out against bigotry and hatred. She particularly pointed to three words in the preamble of the Constitution that she said carry great meaning: “insure domestic tranquility.”

“If those words are to have purpose and meaning today—if we are to be safe in our homes, our schools, our workplaces, our houses of worship, and our public spaces—our policymakers must take specific actions that will make mass shootings a historical, not an ongoing, tragedy,” Martinez said. “We must put an end to gun violence.”

Another imperative is to understand the depth of the racial divide that plagues the legal profession and the country, Martinez said. The ABA will also continue to champion gender parity and women’s rights, welcome its LGBTQ colleagues and pay attention to challenges facing lawyers and law students with disabilities.

“We must not be an insular profession, removed from the people we serve,” she said. “We are a people’s profession that is at its best defending liberty and pursuing justice when we listen to what consumers of justice need.”

In October, for the National Celebration of Pro Bono, the ABA will boost individual, law firm, law department and bar association efforts to promote pro bono through the theme of service for survivors of sexual and domestic violence, she said.

The ABA will also celebrate the 100th anniversary of the Standing Committee on Legal Aid and Indigent Defendants.

In closing, Martinez told the House of Delegates that their colleagues, their country and even the world look to the ABA to lead with its knowledge of the law and respect for principles on which the United States was founded.

“Our finest moments and most enduring contributions have been when we have used our voice and resources for causes about which we can act with authority, and which we can influence with impact,” she said. “As lawyers, we know equality. We know liberty. And we know justice.” 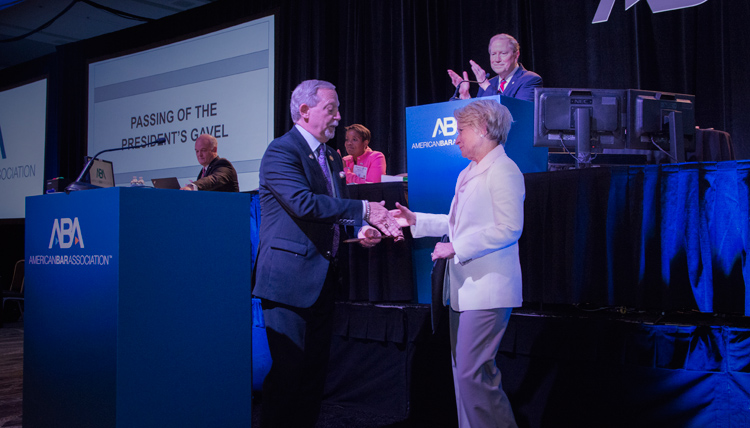