Is Barrett an adequate Ginsburg replacement? Debate over philosophy is appropriate, she says 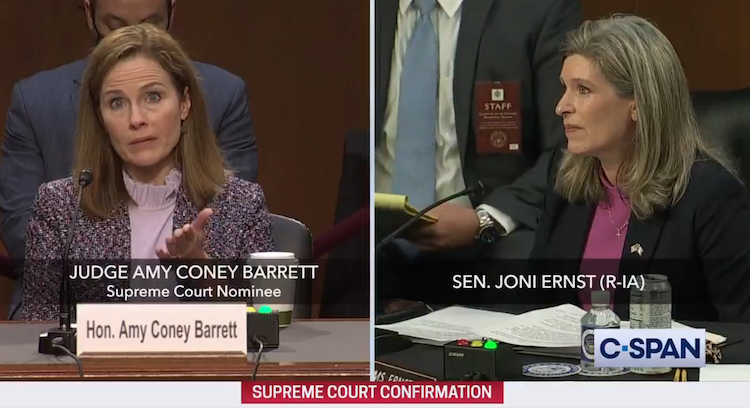 If a senator wants to vote against U.S. Supreme Court nominee Judge Amy Coney Barrett because of her judicial philosophy, she is OK with that.

In questioning at her nomination hearing Wednesday, Barrett said she thinks judicial philosophy is an appropriate topic to explore, and it’s a perfectly understandable ground for a vote against her confirmation.

Barrett spoke in response to a question by Republican Sen. Joni Ernst of Iowa. Ernst asked Barrett how she would respond to those who say she is not an adequate replacement for the late Justice Ruth Bader Ginsburg.

Judicial philosophies such as originalism aren’t intended to yield specific results, she said. Originalists can vary in their decisions, and an originalist may reach the same result as a pragmatist, she said.

“So I think there’s room—and it’s good and healthy—for different approaches to the Constitution and to have debates about that,” Barrett said.

Barrett also offered advice to new lawyers in response to a question by Ernst.

“I guess I would just say, you know, live life to the fullest, seize all of the opportunities you have, and do your best,” Barrett said. “But at the same time, never let work crowd out all of the other precious things in your life, like friends and family and faith and exercise. … I think all of those things that make up our lives apart from work, you know, can’t be shoved aside.”