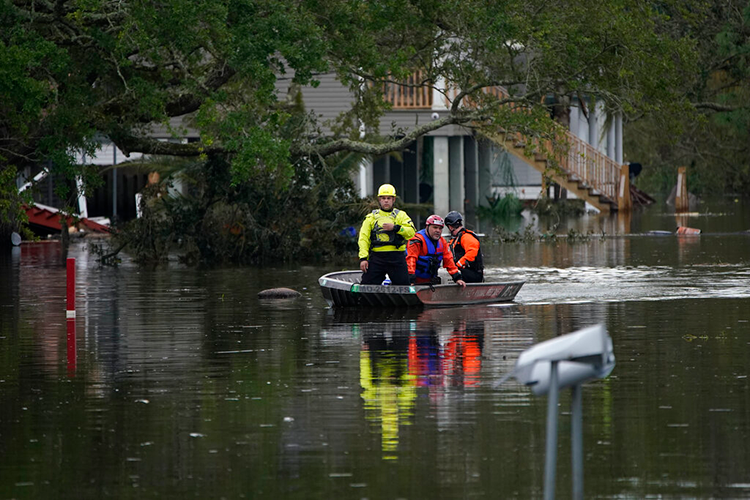 Animal rescue workers drive a boat down a flooded street in the aftermath of Hurricane Ida in Lafitte, Louisiana. Photo by John Locher/The Associated Press.

A federal judge has allowed a man who brought weapons to the U.S. Capitol riot on Jan. 6 to leave Texas to help with Hurricane Ida relief in Louisiana.

In a motion made Monday to temporarily modify his bond conditions, Alex Harkrider asked to volunteer with the Cajun Army, a Christian disaster relief nonprofit organization, along the Gulf Coast for a least a week. The former Marine contended that he “has a long history of volunteerism, specifically with hurricane rescues, which he did for several years prior to his arrest in this case.”

According to Courthouse News Service, Harkrider’s attorney, Kira Anne West, told Judge Thomas Hogan of the U.S. District Court for the District of Columbia during the motion hearing Tuesday that “he would be doing what he was trained to do as a Marine and first responder.”

Hurricane Ida made landfall as a Category 4 storm on Sunday, making it one of the strongest hurricanes to hit Louisiana in modern history. Its 150 mph winds and heavy rainfall left millions of people without power and are responsible for at least six deaths.

Hogan agreed to modify Harkrider’s bond conditions for at least two weeks. He will be supervised by Cajun Army leader Katie Pechon, and according to Courthouse News Service, expected to call his pretrial services officer once a week if he has cellphone reception.

“I’ve got my loads ready to go on the trailer hitch on my truck right now,” Harkrider reportedly told the judge. “I’ve got gas, kegs of water, nonperishable food. I’m ready to help and serve my Cajun neighbors wherever they need me.”

Harkrider and his friend Ryan Nichols were both charged with a 13-count indictment after the attack on the Capitol. He allegedly brought guns, a ballistic vest and a tomahawk axe to the federal building, while Nichols allegedly assaulted a police officer.

“We’re in. 2 people killed already,” Harkrider wrote on messaging app Snapchat, according to the Jan. 17 affidavit in support of the criminal complaint. “We need all the patriots of this country to rally the f— up and fight for our freedom or it’s gone forever. Give us liberty, or give us death. We won’t stand for it.”

Harkrider was released on bond in April. Courthouse News Service reports that he was on house arrest with an electronic monitor until June, when Hogan granted his motion to remove the monitor because of the hardship imposed by its $110 per month cost.

He said at the time that disability checks for injuries sustained during his military service were his only source of income.

Harkrider has pleaded not guilty to most counts in the indictment.