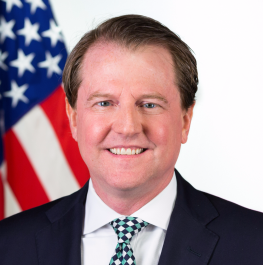 Don McGahn. Photo from the Federalist Society via Wikimedia Commons.

A federal judge in Washington, D.C., ruled Monday that former White House counsel Don McGahn must appear before the House Judiciary Committee to testify in an investigation into how Russia influenced the 2016 presidential election and whether President Donald Trump tried to obstruct justice.

USA Today, Law.com, the New York Times and the Washington Post have coverage.

Jackson cited a 2008 decision by the Washington, D.C., federal court in a case in which the House Judiciary Committee sought to compel testimony by former White House counsel Harriet Miers.

The Miers opinion “persuasively demonstrated” that neither the Constitution nor any law supports the DOJ’s idea that Congress and federal courts have limited power “relative to the expansive authority of the president,” Jackson said.

The DOJ is advancing an argument of “unassailable executive branch authority” that gets separation of powers principles “exactly backwards,” according to Jackson.

“Presidents are not kings,” Jackson wrote. “This means that they do not have subjects, bound by loyalty or blood, whose destiny they are entitled to control.”

Jackson said she was not ruling on the DOJ’s claim of absolute immunity from testifying, and McGahn could invoke executive privilege where appropriate.

The DOJ will seek to stay the ruling and will file an appeal, a DOJ spokeswoman told Law.com.