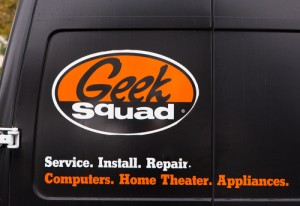 A federal judge in California has tossed pictures collected in a search of a physician’s home that was conducted after Best Buy’s Geek Squad discovered an image of a nude child on the doctor’s computer.

The lawyer for gynecologic oncologist Mark Rettenmaier had maintained his client’s Fourth Amendment rights were violated by the Geek Squad computer search, and any evidence found as a result of the search for child pornography should be suppressed.

The lawyer, James Riddet, said the Geek Squad search, conducted in 2011 at Best Buy’s data recovery facility in Kentucky, was done to assist law enforcement and with the government’s knowledge.

But U.S. District Judge Cormac Carney found that Rettenmaier had signed Best Buy paperwork in which he agreed that any child pornography found on his computer would be turned over to the authorities. Carney instead tossed the evidence because of misleading information in the search warrant application, report the Washington Post and the OC (Orange County) Weekly.

Carney ruled on Monday, but did not issue a written opinion. He said the image discovered by the Best Buy technicians wasn’t child pornography, and FBI agents didn’t disclose the nature of the photo when they applied for a search warrant.

Nor did the agents disclose that the picture was found in “unallocated space” on the computer’s hard drive, which can’t be accessed without specialized tools, Carney said. Photos in unallocated space usually don’t have metadata showing when they were created or accessed.

A spokesman for federal prosecutors in Los Angeles said the office would consider its options after reviewing a written ruling by the court.

Carney said in a previous ruling that eight technicians at Best Buy’s Kentucky facility had served as sources for the FBI, and all had received payments from the FBI at some point.

Best Buy says it turns over evidence to the FBI only when it is inadvertently discovered. “Geek Squad does not work for the FBI and never has,” the Richfield, Minnesota-based company said in a statement to the Washington Post.