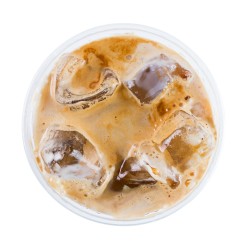 A federal judge in Los Angeles has tossed a lawsuit alleging Starbucks is misleading customers about the size of its iced beverages because some of the liquid is displaced by ice.

Anderson agreed with Starbucks that reasonable members of the public would not be deceived. “As young children learn,” Anderson wrote, “they can increase the amount of beverage they receive if they order no ice.”

Anderson also noted that Starbucks serves its drinks in clear cups, making it easy to see that the drink includes both ice and liquid.

Forouzesh’s would-be class action had alleged fraud, negligent misrepresentation, breach of warranty and unjust enrichment. A similar lawsuit is pending in federal court in Illinois, and Starbucks filed a motion to dismiss that case on Thursday, the Chicago Tribune reported.

Updated Aug. 25 to note Starbucks’ subsequent motion to dismiss the other suit.