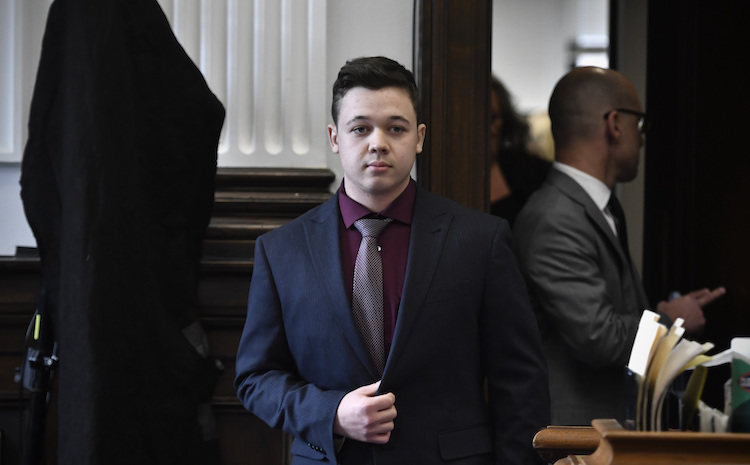 Kyle Rittenhouse enters the courtroom to hear the verdicts in his trial at the Kenosha County Courthouse in Kenosha, Wisconsin, on Friday. Rittenhouse was acquitted of all charges after pleading self-defense. Pool photo by Sean Krajacic/The Kenosha News via the Associated Press.

Jurors in Kenosha, Wisconsin, acquitted 18-year-old Kyle Rittenhouse of all charges Friday in the shootings of three men, one of them fatally, during racial justice demonstrations in August 2020.

The Chicago Tribune, the Washington Post, Reuters, Politico and the New York Times are among the publications that covered the acquittal on charges of homicide, attempted homicide and reckless endangerment.

Rittenhouse began sobbing after the jury announced the verdict, according to the New York Times. He had also cried during the trial when he began to testify about the shootings.

Jurors apparently agreed that Rittenhouse was acting in self-defense when he shot the three men. He was 17 at the time.

Rittenhouse had testified that the first man he shot had put his hand on Rittenhouse’s rifle and the second hit him with a skateboard. The third man, who was shot and wounded, acknowledged that he had a gun and had unintentionally pointed it at Rittenhouse.

Under Wisconsin law, a person can use deadly force if they reasonably think that it is necessary to prevent imminent death or great bodily harm, according to prior coverage by the Associated Press.

Jurors deliberated for more than 25 hours over four days.

Judge Bruce Schroeder had previously dismissed a gun charge that bans youths under age 18 from possessing a dangerous weapon, with some exceptions.

Schroeder had sided with defense lawyers who said one exception was confusing, and it appeared to allow youths age 16 and 17 to carry rifles and shotguns that do not have short barrels, the Milwaukee Journal Sentinel previously reported.