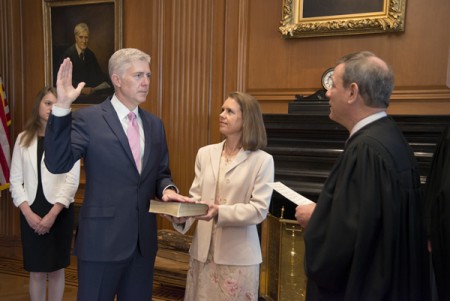 Louise Gorsuch holds the Bible as her husband, Neil, is sworn in as a U.S. Supreme Court justice by Chief Justice John G. Roberts Jr. in 2017. Photo from Wikimedia Commons.

She writes about her experiences as an immigrant in an article for Fox News.

Louise Gorsuch met her husband in England. They were engaged three months later, and they moved to Washington, D.C., three months after that.

“Unlike so many immigrants who come here because they are fleeing something—perhaps violence or political persecution—I wasn’t escaping,” she writes. “My story is less dramatic but shared by many.”

Gorsuch tells of navigating cultural differences in the United States. “Who knew, for example, that you couldn’t remove a stick of butter from the carton of four and buy it separately?” she says. “After all, the lady in front of me tore the twelve-egg carton down to six. And why did my husband’s English-speaking grandmother need him to translate for me?”

Gorsuch says she is a country girl who began to see the United States in a new light when she and her husband attended a rodeo in Frederick, Maryland. “This was the America I would come to love,” she says. “It seems trite to talk about a melting pot but the diversity of cultures and viewpoints offers a home to any soul. I had found my place.”

Gorsuch became a citizen because she wanted to vote and “go all-in on the project of being in a republic premised on the right to rule oneself, and to share the obligation to make the republic work.”

Gorsuch acknowledges that self-government can be “messy” and people in a democracy “might argue bitterly.”

“Nowadays many hear complaints that the intensity of the noise and turmoil in today’s political culture is new, but I would refer them to our history,” she says. “To me, the raised voices should be celebrated, not reviled. They are not a symptom of dysfunction but a sign of health, a demonstration that the nation can withstand the rancor that comes with self-government and, eventually, get on with the rodeo.”