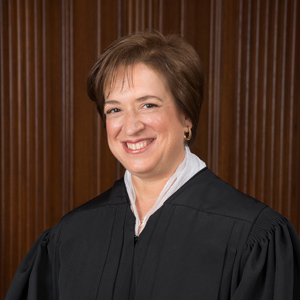 U.S. Supreme Court Justice Elena Kagan warned Thursday that it would be dangerous if the Supreme Court loses touch with public sentiment or appears to be implementing political preferences.

“I’m not talking about any particular decision or any particular series of decisions. But if, over time, the court loses all connection with the public and the public sentiment, that’s a dangerous thing for democracy,” Kagan said. “We have a court that does important things, and if that connection is lost, that’s a dangerous thing for the democratic system as a whole.”

Kagan said the high court could retain its legitimacy by doing things that do not appear to be political or partisan and by “not behaving as though we are just people with individual political or policy or social preferences.”

The Supreme Court, she said, should overturn precedent only in extraordinary circumstances, should decide only what is necessary in narrow decisions, and should be consistent in its methods of deciding cases.

“People are rightly suspicious if one justice leaves the court or dies and another justice takes his or her place and all of sudden the law changes on you,” she said.

Hat tip to How Appealing, which also linked to Reuters coverage of Kagan’s remarks.