Divorce litigant charged in stabbing of lawyer at deposition

Police have arrested a divorce litigant for allegedly stabbing a Florida lawyer multiple times during a deposition May 1.

Police charged 58-year-old Gordon James King with aggravated battery with a deadly weapon, false imprisonment and tampering with a victim, according to a press release from the Winter Park Police Department. The Orlando Sentinel, WESH.com and Click Orlando have coverage.

King was an Orange County sheriff’s deputy from 2008 to 2017. He was arrested Thursday at his home in Seminole County with help from the U.S. Marshals Task Force.

The stabbing happened at a Winter Park, Florida, law firm. The lawyer was not identified. The lawyer and King were taken to the Orlando Regional Medical Center for treatment of stab wounds. The lawyer had a collapsed left lung, a punctured diaphragm and a cut to his hand, according to Click Orlando.

There is audio of the altercation from the deposition stenographer. Court documents cited by the local publications have details.

King allegedly started yelling during the deposition because of a no-contact order against him, according to Click Orlando. The lawyer for King’s estranged wife announced that the deposition was being canceled. King pushed aside his own lawyer and made his way to the victim, yelling: “What are you going to do now you fat little [expletive]?” 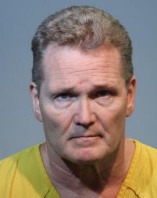 King allegedly punched the lawyer in the head and chest. After someone yelled that 911 had been called, King allegedly slammed the lawyer’s head in to the table and yelled: “I’m going to kill you right now, you fat little [expletive].”

At that point, the lawyer took a knife out of his pocket and tried to slash King’s arm. King gained control of the knife, allegedly slashing the lawyer’s hand as the victim tried to block the knife. King allegedly stabbed the lawyer twice in his left side, saying: “I’m killing you.”

“I think you already have,” the lawyer said. King stopped attacking the lawyer at that point, according to Click Orlando.

A person who answered the phone at a law firm on the street where the stabbing happened told the ABA Journal there would be no comment.

At the hospital, King allegedly said he was going through a “two-year ugly divorce” and he “just lost it again.”