Lessons for liberals can be found in story of Federalist Society influence, says book review 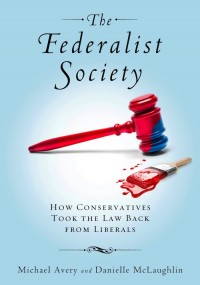 Libertarians and conservatives with varying philosophies managed to put aside their differences to advance a broad agenda based on originalism, according to the authors of a new book.

They were united by the Federalist Society, which began in 1982 with a symposium and spread to law school campuses throughout the nation, according to the authors of The Federalist Society: How Conservatives Took the Law Back From Liberals. The authors are Suffolk University law professor Michael Avery and Nixon Peabody associate Danielle McLaughlin.

The New York Times has a review by George Washington University law professor Jeffrey Rosen, while the Chronicle of Higher Education has an article about the Federalist Society’s influence by Avery and McLaughlin.

“The history of the Federalist Society is a story of how disaffection, bold ideas, commitment to principle, and enlightened institution-building have created a significant conservative shift in the legal, policy, and political landscape of America over the past 30 years,” Avery and McLaughlin write in their article.

Liberals hoping for a “how-to manual for seizing power” in the book will be disappointed, according to Rosen’s review. In his view, the book “reads like a collection of law review articles” and has no original interviews with lawyers identified as key Federalist Society members and allies.

But Rosen says the story of the Federalist Society does offer some lessons, though not explicitly spelled out. “First, the various strands of legal liberalism—civil libertarians, Great Society liberals, neoprogressive technocrats, economic populists and advocates of equal rights on the basis of race, gender and sexual orientation—would do well to set aside their ideological differences and converge around a common approach to constitutional interpretation that citizens can understand,” Rosen says.

“And second, if liberals want to take the courts back from conservatives, they have to recognize that ideas—and judicial appointments—matter.”