Limit guns in courthouses and train those who use them, ABA House of Delegates urges 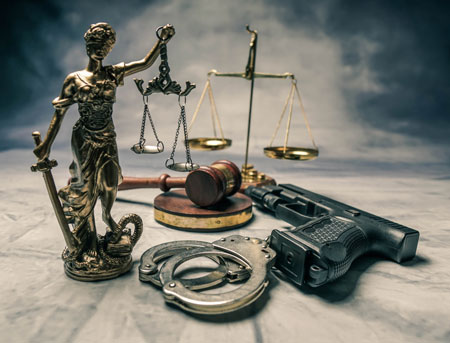 Only court personnel who need guns for security reasons should be permitted to carry them in the courts, the ABA House of Delegates said Monday.

The House passed Resolution 105, which urges jurisdictions to limit gun carrying in courtrooms, courthouses and their immediate grounds to people who need firearms for security reasons. Security officers, court personnel and judges approved to carry them should be subject to training requirements, the resolution says.

The resolution was submitted by the ABA’s Standing Committee on Gun Violence, and advisory member Monte Frank, a delegate from the Connecticut Bar Association, introduced it in the House. Frank said the resolution wouldn’t have prevented any of the recent high-profile mass shootings—or the “slow-moving massacre” of more routine gun violence—but it still has an important role to play: to make sure people coming to our courts to seek justice can do so safely.

“You can’t have access to justice if you don’t have safe access to the courthouse,” said Frank, a member at Pullman & Comley in Bridgeport, Connecticut.

There was no opposition, but when a delegate rose to ask about the status of law enforcement officers appearing in court in the course of their job duties, Frank clarified that they would be permitted to carry firearms.

As the ABA Journal reported last year, surveys of lawyers show that attorneys from all practice areas are threatened or victimized by violent parties and opposing counsel, but it’s most likely for those who work in family law—particularly in cases involving domestic violence—and criminal justice.